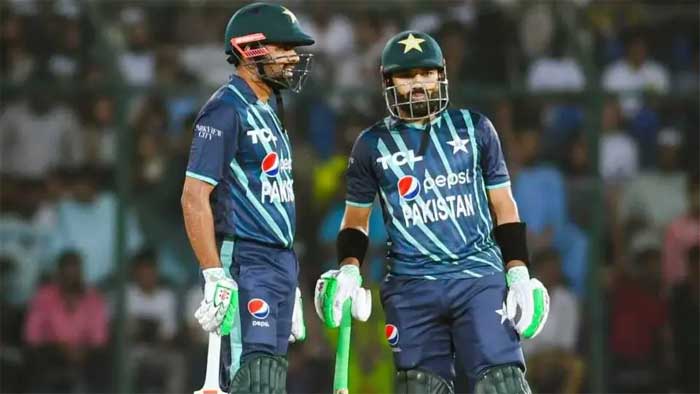 KARACHI: A world record unbeaten 203-run opening partnership between Babar Azam and Mohammad Rizwan gave Pakistan a comprehensive victory as they chased down a mammoth 200-run target to beat England by 10 wickets in the second T20 match at the National Stadium in Karachi.
Babar Azam, his second T20 opener, scored a match-winning and brilliant century, remaining unbeaten on 110 runs, 11 boundaries and 5 sixes in 66 innings.
Mohammad Rizwan gave two chances, also played a supportive knock, scoring 88 runs in 51 balls.
Pakistan made 203 runs without losing a single wicket.
England had earlier set a target of 200 runs to beat Pakistan, scoring 199 for the loss of 5 wickets.
After Shahnawaz Dahani took 2 back-to-back wickets of 42 runs, England posted 82 runs in 10 overs. Moeen Ali, who hit 4 sixes and 4 fours in a 23-ball 55, was the backbone of England’s innings, which was also supported by a good innings from Ben Duckett, who scored 43 runs from 22 deliveries.
Haris Rauf and Shahnawaz Dahani shared 2 wickets each. Today (Friday) the third match of the seven-match series will be played at the Karachi National Stadium.