‘Back to the Future’: The new DeLorean has an old look | Pro IQRA News

If you’ve seen the new DeLorean Alpha5 electric car, you’ll probably be disappointed that it doesn’t look anything like the famous DeLorean DMC-12 from the movie “Back to the Future”. Really, apart from the gullwing doors, there’s not much that clearly binds the cars together.

But Alpha5, which made its public debut recently, does resemble some DeLoreans you might not remember because none of them were actually made.

Buying the DeLorean name, installing it on some new vehicles, and declaring it an “official DeLorean” is one thing. But the DeLorean DMC-12 is a modern design icon. The successor should not only bear the name DeLorean, but should also look like DeLorean.

But after 40 years, what should a DeLorean look like? Surely it should at least resemble the DMC-12 that starred in the movie, but the car company went bankrupt even before the first film debuted. So the company’s design did not evolve over the next decade as other car brands did. Ironically, the “Back to the Future” car remains firmly rooted in the past. To imagine what the DeLorean would look like today, the company’s new designers had to fill a gap of nearly 40 years.

They wanted to imagine what the DeLoreans would be like if things didn’t stop. To do that, they’ve filled in some rather large gaps in the timeline, starting with the future the original automaker had envisioned for himself.

As it turns out, the Alpha5’s ancestor was not actually the DMC-12. Instead, the Alpha5 traces its roots back to DeLorean’s second car: the four-seater DMC-24, a car not just made by a new designer. 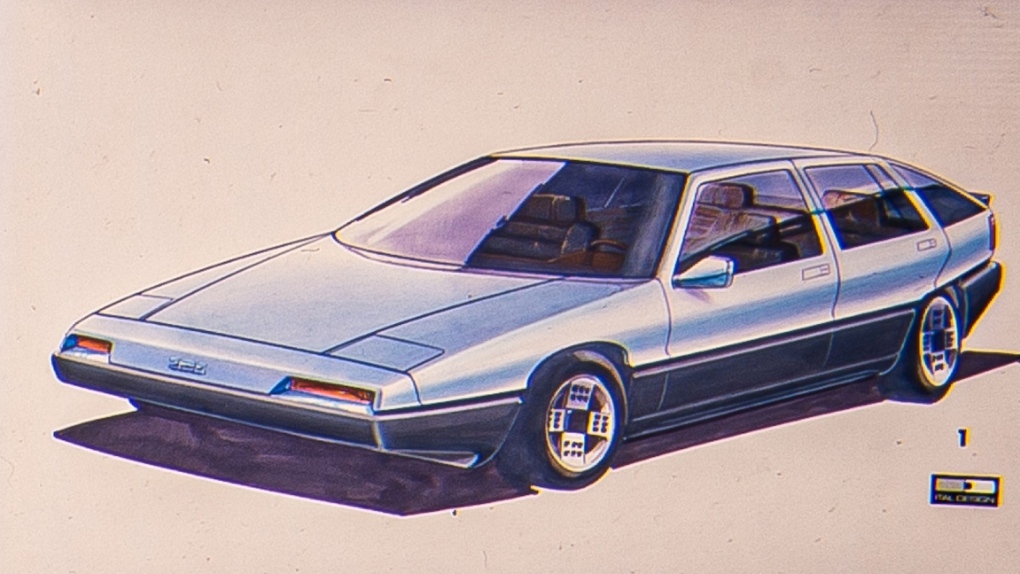 The DeLorean DMC-24 concept car was never launched under that name. (Courtesy of the DeLorean Motor Company)

After going out of business in 1982, the original DeLorean Motor Company never produced the DMC-24, but was in development. ItalDesign Giugiaro, the Italian design firm that made the angular, bare metal shape of the DMC-12, had come as far as making versions of the concept car before the DeLorean sank. The DMC-24 was finally unveiled later in 1982, in a slightly modified form, as the Lamborghini Marco Polo concept car.

Then, of course, there are all the other cars ItalDesign helped develop for the DeLorean over the next 40 years. There was the Alpha2, revealed in 1996, the Alpha3 in 2006 and, the Alpha4, the hydrogen-powered SUV launched in 2013.

Okay, not really. The new DeLorean once again turned to ItalDesign, now a subsidiary of the Volkswagen Group, to design its new car and, together, they decided to create a detailed fictional design history for the brand.

Neither of those vehicles — Alpha2 through 4 — ever existed, but DeLorean executives and designers ItalDesign talk about them as if they existed. There are quarter scale models of all these cars. There will be a period car magazine with a “just revealed” model on the cover. There’s Hot Wheels packaging designed by Mattel’s graphic designer in the correct style for each period just as if toys were hanging on drugstore shelves in those days. (Hot Wheels actually sells the DeLorean Alpha5 model.)

The new DeLorean Motor Company and its partners at ItalDesign are not trying to scam people. Anyone who has lived for the last 40 years knows this vehicle never existed. But going back to cars from 1982 to design modern vehicles would keep the company stuck with a “retro” look that really only applies to one model, says CEO Joost de Vries. So designers make history as a way to break free from the constraints of true history.

The different manufacturing processes of the vehicle helped designers identify key elements of the DeLorean “design language”, such as the smooth front wing. It was modeled on the darker strip of material on the nose of the DMC-12 but morphed into a functional aerodynamic feature. The Alpha4, an SUV, will serve as the model for DeLorean’s next planned model after the Alpha5, an electric SUV.

A DARKER REALITY, AND THE BIRTH OF A NEW DELOREAN

This fake history looks promising but the real DeLorean history is much darker. This serves as a warning to a number of new automotive start-ups, including the new DeLorean, about how bad things can go wrong and how quickly. Having just started production, DeLorean was liquidated shortly after its founder, former General Motors executive John DeLorean, was arrested on drug charges in a taped arrest operation. He was later released, but the company, which had been struggling anyway, did not survive.

The DeLorean assets were purchased by a Texas mechanic named Stephen Wynne, along with other undisclosed investors. The Wynne Company builds a reputation by maintaining and repairing DeLoreans. The original plan was for the new DeLorean company to make an electric version of the original DMC-12 but, in recent years much bolder plans have been made.

The new DeLorean Motor Company was formed, with Wynne’s original company as the largest investor, to manufacture all new electric vehicles. De Vries, who previously worked with Tesla and Karma Automotive, another EV startup, is leading the company, and a new headquarters building is planned in San Antonio.

For now, there will be no DeLorean factory, de Vries said. The company will work with an outside company to build the car, de Vries said, just as Fisker did with its new Ocean SUV. Alpha5 is planned as a limited edition. Only 9,531 will be built, only one more than the DeLorean made from the DMC-12. The company expects the cars to be produced in 2024.

“The Coupe is our halo car,” says de Vries. “It’s amazing. This is the purest interpretation we have of the brand, but we have to switch to SUVs if we want to be a car company.”

That’s a big part of the fabricated history of reason. The DeLorean needed a design legacy to develop, he said, to develop more developed themes into vehicles that might not have even been envisioned in 1982. De Vries hopes to reveal the new DeLorean full-size luxury SUV in early 2023.

“We’re actually launching our second-generation SUV,” de Vries said, “because we did have an SUV back in 2013.”

Well, not really, but designers will be working from the Alpha IV to get their hands on the company’s future production SUV. After the radical-looking Alpha5, de Vries promises, the big SUV won’t be conservative and constrained.

“We can’t afford bricks,” he said.

DeLorean also unveiled two concept vehicles at home in Monterey, California, where the company showcased its first planned production model. One, the Alpha5 Plasmatail, is a version of the Alpha5 with a taller back for more storage space. The other, the Omega, is an extreme off-road EV with big tires and a slim body high off the ground.

DeLorean designers have filled the past and looked far into the future. For now, it’s still in progress. 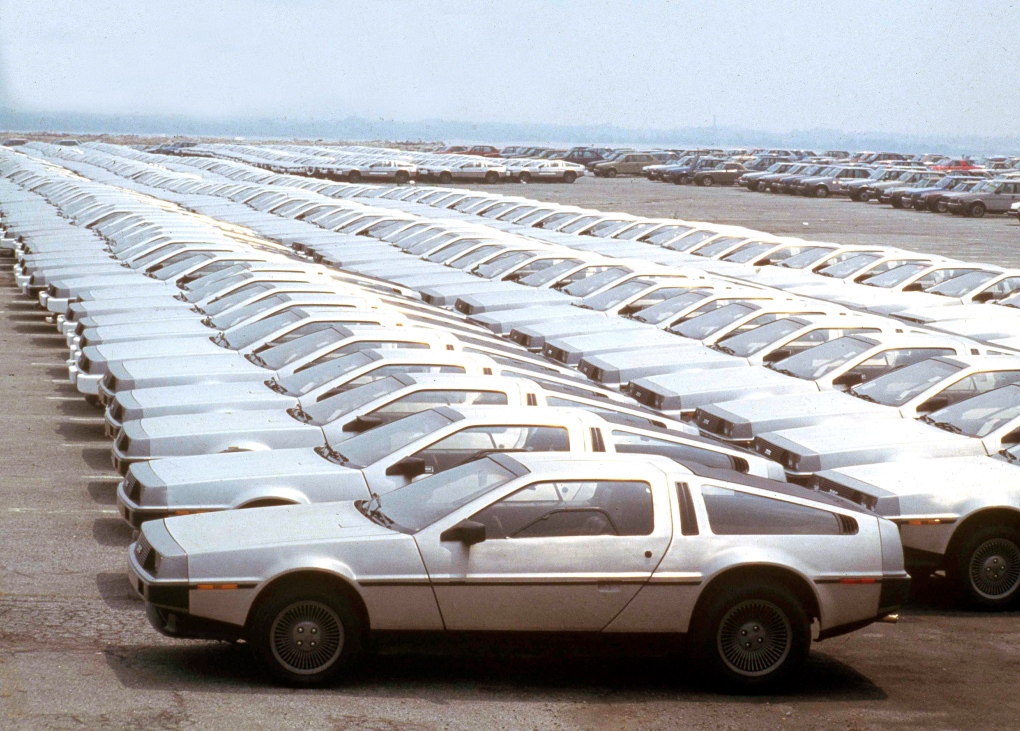 Federal plan to improve access to diabetes care introduced in...

It’s not that easy to disqualify someone for life, Chief...

Hemant Sarkar will set up camps in panchayats for prompt...