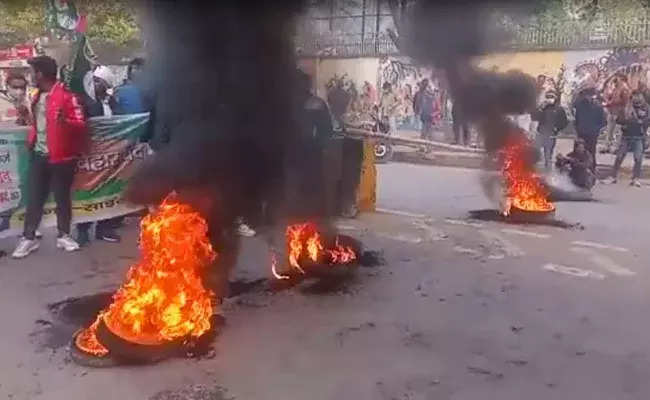 The Railway Recruitment Board (RRB) on Friday announced its support for the Bihar bandh given by student unions in protest of the chaotic conduct of examinations. Leaders of student unions and opposition parties have been coming on the roads since morning and blocking vehicles everywhere. Tires on the roads are set on fire and deployed. In Bihar the bandh is severe with effect. The Nitish government has taken precautionary measures. “Bihar has the highest percentage of youth in the country. The unemployment rate is high here. The state governments along with the Center have been cheating students. They have been promising to give jobs but the Nitish Kumar government has lashed out at them when they took to the streets demanding jobs,” the statement said. . NSUI, a student wing of the Congress party, staged a protest in front of the Railway Ministry office in Delhi in support of students’ agitation for railway jobs. Railway Minister Ashwini Vaishnav burnt the effigy. AICC general secretary Priyanka Gandhi addressed students who were beaten with sticks during protests in Prayagraj, Uttar Pradesh. Expressed support for the students ’concern. Meanwhile, the UP government has suspended six policemen who lathicharged students. Meanwhile, the Railways has released a document explaining the doubts of students in conducting RRB exams. It has set up a High Power Committee to resolve the issues and asked the employees to send any queries or complaints to this committee. However, Congress general secretary MLA Sandeep Sourav alleged that the committee was conspiratorially set up to delay the UP elections. The Railway Department has issued notifications for a total of 35,000 jobs from Level 2 to 6 .. 1.25 crore people have applied. However, 60 lakh people appeared for the exam and the first phase results were released on January 15. In Bihar and Uttar Pradesh, a large number of youths took to the roads to protest against the alleged irregularities in the exams. Protests in Bihar on January 26 led to tensions. The train was set on fire near Gaya railway station. Meanwhile, the NDA ally and former CM Jeetanram Manji’s party Hindustani Awami Morcha has announced its support for the Bihar bandh.

Discover the temple-like architecture beneath the ancient mosque Pi News

Danger for job seekers on the curve! Retired Judge Biplob Kumar Sharma took charge of the investigation of the 2014 APSC examination. ProIQRA...

Weather Update: People will get relief from the scorching heat, there will be rain in these states, strong winds will blow Pi News

Four vehicles are parked outside the house for my arrest: Sheikh Rashid’s claim Pi News

Nitish praised the Center for reducing petrol prices, saying his government would do the necessary work. ProIQRA News

Going home after the Olympic selection trial healed me, then worked hard on my weaknesses: Nikhat Zarin ProIQRA News