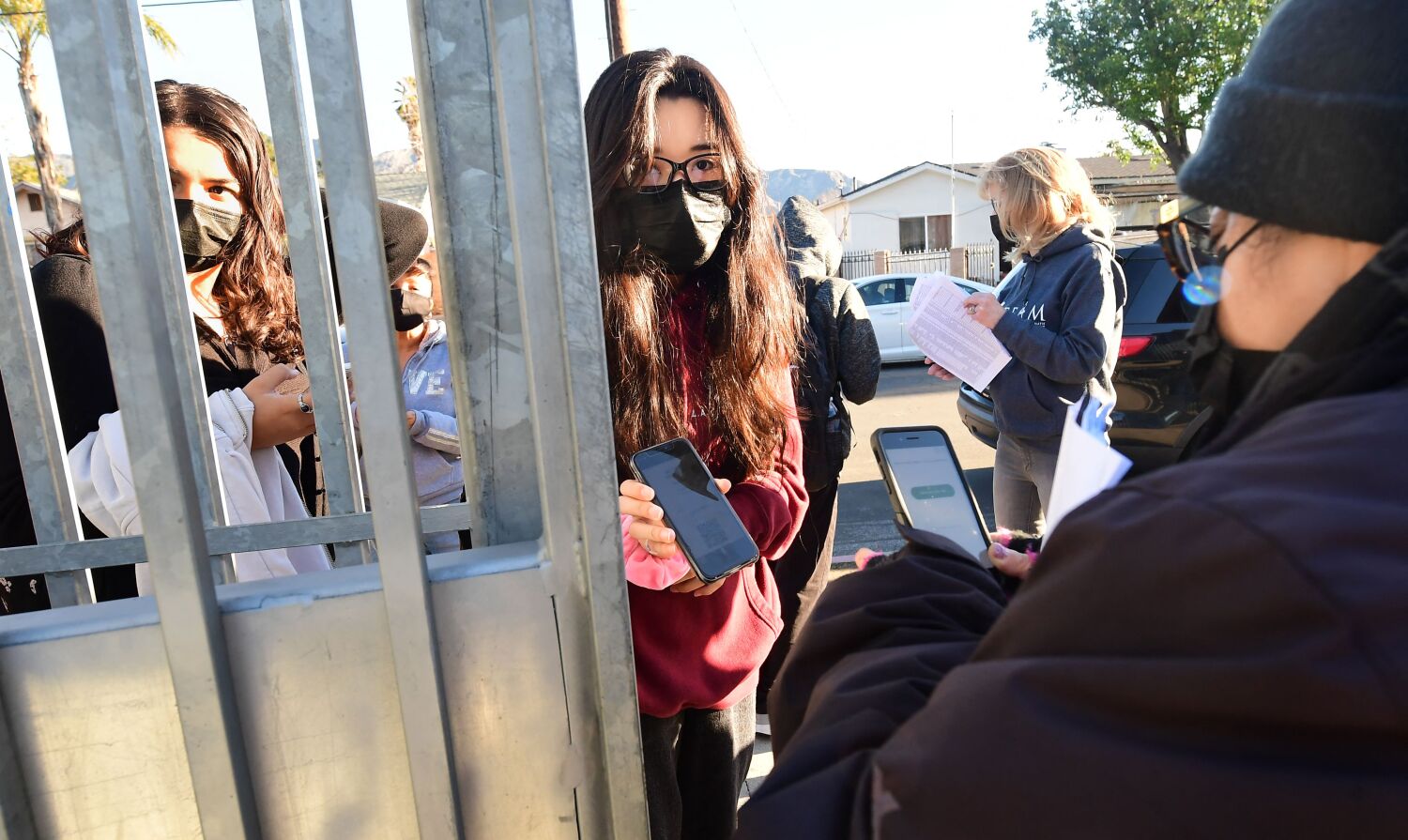 In Los Angeles, schools saw a massive 130,000-student drop in daily attendance when students returned from winter break this week, the latest pandemic hit to education.

In San Diego, severe staffing shortages led school leaders to warn families of the possibility of “COVID Impact Days” similar to heat or snow days. And in Culver City, district leaders announced that they would close all schools next week to give students and staff time to “recoup and recover.”

Educators across California are in triage mode working to keep campuses open and the state’s 6 million children in class as Omicron-fueled coronavirus cases surge. Save for some notable exceptions, they are managing to do so. But staff and students are strained in new and stressful ways as yet another intense pandemic chapter unfolds at schools.

Amid outbreaks and rocketing infections, districts have closed classrooms; some teachers are trying to figure out how to adjust their lesson plans with fewer than a third of students at their desks; and administrators and other district employees are scrambling to fill in for absent staff. Only two weeks into the spring semester, many are exhausted.

“I’m frustrated for my staff, I see the wear and tear on them, ” said Craig Spratt, principal of Cerritos Elementary School in Cerritos. “They’re putting on the bravest of faces. They’re providing the best routine they can for their kids and I’m just doing whatever I can to relieve them of the extra burdens so they can focus on their kids. It’s a very stressful time right now.”

A few districts have delayed the start of the spring semester or closed schools amid the surge, including Montebello Unified and the small Mammoth Unified School District, where schools were ordered closed for three weeks.

The spike in school cases has been swift and dramatic. In Los Angeles County prior to Omicron, the rate of positive cases among students and staff was “extraordinarily low” at about 0.2%, said county Public Health Director Barbara Ferrer in a news briefing this week. Last week, it soared to nearly 15% — or more than 80,000 positive tests.

Health officials are investigating about two dozen school outbreaks — which were largely linked to school sports during the winter break. And Ferrer warned the surge would probably lead to more.

In L.A. Unified, average attendance through Thursday was about 67%, district officials said. All schools remained open for in-person learning and administrators left their offices to help to cover for teacher absences when substitutes could not be found.

San Pedro High School Principal Steve Gebhart said he felt the emptiness of his campus as he walked this week through the school’s quad and near the flagpole during lunch.

Students have been hesitant to return amid overwhelming news of the coronavirus surge but started to come back as they saw that school “was safe and all the measures in place were working,” Gebhart said.

The school also had several teachers out each day but managed to cover them with certificated staff without having to combine classes, he said. Gebhart substituted in a health class Wednesday.

In San Diego, officials sent a message to families letting them know that because of the severe challenges facing schools, children would probably experience disruption during the next few weeks — whether it be a substitute, classwork in a study hall-type environment or “instructional time replaced by self-paced activities.”

“These are temporary measures required by the pandemic, and employing these strategies will allow San Diego Unified to keep classrooms open,” officials said.

As a last resort, district officials said they would work with local authorities to declare a “COVID Impact Day,” closing campuses for a day.

In Burbank, where students returned to campus on Jan. 3, attendance fell to about 75% and at least eight classrooms at five different elementary schools have had to close, said Supt. Matt Hill. The district has also leaned on office staff to fill in because of staffing shortfalls.

Districts need more flexibility and support from the state, Hill said. He wants to see the state start distributing coronavirus tests directly to families, rather than placing an additional burden on schools to hand them out. He also wants the state to provide testing clinics for districts so that hundreds of districts aren’t tasked with setting up their own.

In Culver City, district officials announced Friday that because of the spike in coronavirus cases, it would close all schools next week. The K-12 public school system, the first in the nation to issue a coronavirus student vaccination mandate, had recorded 587 student cases since Aug. 2020. Of those, 463 were reported in the last two weeks. The district has 7,100 students and 900 employees.

“Things accelerated too quickly,” Supt. Quoc Tran said. By taking a few days off, “everyone will get the chance to be distant from one another, recoup and recover and come back Monday.”

Students will be sent home with a coronavirus testing kit and they will need to show a negative test to return Jan. 24.

In Oakland, students also began circulating a petition echoing teachers’ safety demands. To date, it has been signed by more than 1,200 students. Ayleen Serrano, a petition organizer and a sophomore at MetWest High School, said she has felt the strain of the surge. All her classes are only half full, she said. One has only 7 students instead of 20.

“Even when there’s two or three kids missing it makes a big dent,” she said. “We also can’t learn anything because a lot of the kids, they’ll fall behind.”

Across the state, staffing shortages have led teachers and school officials to take extraordinary measures.

In Santa Ana, kindergarten teacher Elaine Vique began experiencing COVID-19 symptoms just a few days into the school year. After testing positive, Vique, who has taught at Lincoln Elementary for 27 years, was forced to stay home as her colleagues were spread thin to cover classes.

So on Sunday night, after recovering from the moderate symptoms and while prepping plans for a substitute, she instead asked her vice principal if she could teach her 23 kindergartners from her home.

“I was just thinking, there’s no substitutes, they are already behind, I have to do what I need to do to help out,” Vique said.

On Monday morning, she appeared on a large screen in front of her students, who looked up in quiet amazement. She was able to continue her lessons on phonics and math while another staff member supervised her class in person.

“I really, really tried to keep things normal for them, as normal as possible,” Vique said. “They really need that.”

Santa Ana district officials said they are hopeful the surge in their community is starting to subside. After students returned to campus on Jan. 3, attendance dipped to about 85%, but has started to rebound, spokesman Fermin Leal said.

In Don Austin’s office in Palo Alto, there is a mantra he scribbled on his whiteboard months ago: “It will be harder to reopen than it will be to close.”

It served as a reminder to the Palo Alto Unified School District superintendent that he and his staff should avoid shutting down campuses at all costs.

The district of about 10,500 students returned to campus on Jan. 4. While some teachers were out sick, Austin said, a shortage of bus drivers, food service workers and school nurses was also raising concerns.

“It was flat-out scary,” Austin said. “We were able to limp through by the skin of our teeth.”

By Saturday, he and his team were brainstorming on how to address the strain on their staff. Their solution? Enlisting parents, who have been kept out of schools due to coronavirus safety protocols. The district launched 1 Palo Alto on a Sunday night and pushed out emails and texts to parents.

By Wednesday, the district had signed up 765 parents to volunteer at coronavirus school clinics, becoming cashiers in the cafeteria, wiping down desks at the end of the school day and assisting with clerical duties.

Gov. Gavin Newsom on Thursday said the state is moving to send more coronavirus tests and high-grade masks to campuses while also making it easier to bring on substitute teachers to help with staff shortages. Schools have also been given funding to extend the school year if necessary to meet instructional days, he said.

Asked if schools should have a backup plan for online learning, Newsom said children should be in school.

“We want them safely in in-person instruction,” he said. “And the overwhelming majority of the schools are working through this and let me just acknowledge, it’s not easy.”