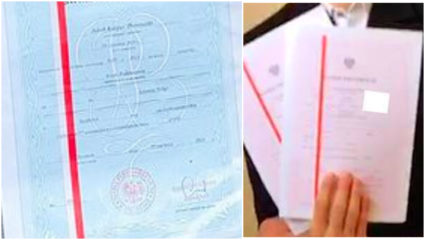 America : Ted Sams regretted not being able to earn a high school diploma for 60 years. However, he can now call himself a graduate after earning his diploma from San Gabriel High School in Southern California on Friday. When Ted was still in high school in 1962, he was embroiled in a controversy that led to his suspension five days before the academic session ended.

He said that due to the suspension, he could not take the crucial examination of the final session. Later he took this exam in the summer. Ted (78) said, ‘When I returned to school with the test results, they refused to give me my high school diploma, because I owed $4.80 for a book.’ He said, ‘After this I came out of school. I told myself, now forget about the diploma.’

However, TED’s original diploma still existed with the school management. Ted’s joy knew no bounds after he received his diploma from San Gabriel High School on Friday. ‘For years I kept complaining to my kids that I couldn’t get a high school diploma because I didn’t have $4.80. Now I will proudly put my diploma on the wall of my room.