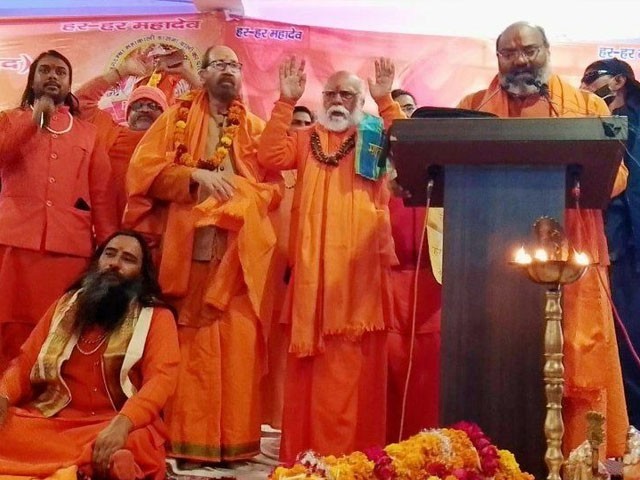 New Delhi: A speaker at a meeting of extremist Hindus urged the participants to massacre 2 million Muslims, saying that protection of Sanatan Dharma was possible only if you could do so.

A video of a rally in the Hindu holy city of Haridwar has gone viral on social media, in which it can be seen that in the presence of a BJP MLA, a prominent participant dressed as a Hindu priest was involved in the massacre of Muslims. Provoking

The speaker said that you people should not be worried about going to jail for killing Muslims. If only a few hundred soldiers are found, it is enough to massacre 2 million Muslims.

The extremist speaker further said that killing of 2 million Muslims will be our victory and only if you do so will the protection of Sanatan Dharma be possible.

The video was also confirmed by the international news agency AFP. Indian police have announced the start of an investigation into the incident after it was criticized by users on social media.

Muslim leader and lawmaker Asaduddin Owaisi responded on Twitter, saying there was a clear case of incitement to genocide. The government should make the protection of Muslims possible and such miscreants should be restrained.

Biden is on a roll, signs a “significant” law on combating the climate, reducing drug prices | Pro IQRA News

How did the two-footed turtle Shimmy get from Lake Erie to Burlington? | Pro IQRA News

Trimmer or saw? Choose the right tools for late summer pruning in your yard and garden | Pro IQRA News