Migrations at the Center of the World’s Conflicts | 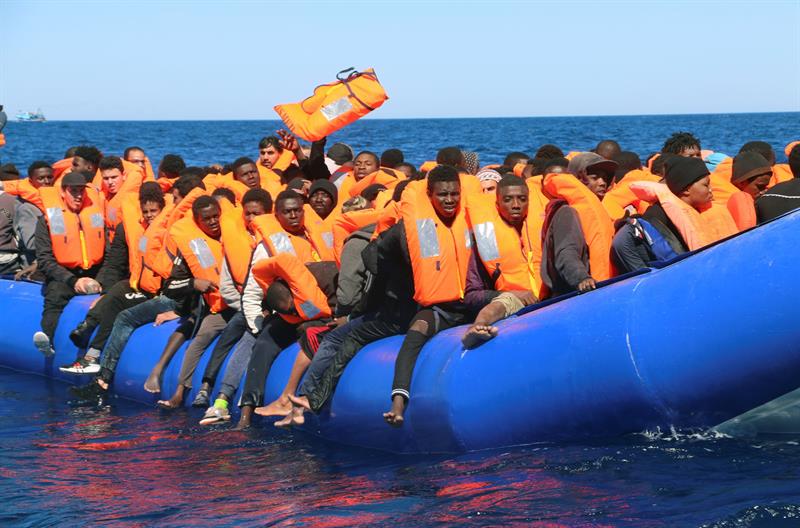 Magnitude of the problem

Migration is not a new effect in the world, but it is becoming a very serious problem for humanity.

The International Organization for Migration (IOM) in its report on migrations in the world for 2020 (as of June 2019) accounts for almost 272 million international migrants worldwide, almost ¼ more than a decade ago. This represented 3.5% of the world population in 2019, when at the beginning of this century its significance was 2.8%.

Seen regionally, Asia (31%), Europe (30%) and America (26%) concentrate almost 90% of this international migrant population, according to the Global Data Portal on Migration.

For its part, it has been mentioned that in the world there were a total of forcibly displaced people that reached 79.7 million people by 2019, distributed as follows: 26 million refugees, 45.7 million internally displaced, 4, 2 million asylum seekers and 3.6 million Venezuelans displaced abroad (UNHCR).

Looking only at the statistics, it is easy to understand why migration has become one of the biggest problems on a global scale. As mentioned, although it is true that they have always existed, today they are presented as a great problem for their reasons and consequences on the receiving countries or regions, even more so when this migration is illegal and disorderly.

As the reasons for migrations of multiple and varied origin, where those of a political, social order, by war conflicts, religious, humanitarian, climatological, search for opportunities and improvement in living conditions stand out, international institutions have already been committed to attend to the issue.

Indeed and bearing in mind the magnitude of the problem, international organizations, for years now, have raised their challenges, which is why the United Nations established among the Goals for Sustainable Development (SDG) to facilitate migration and mobility of women. people through the application of planned and well-managed migration policies. By the way, among some of the objectives related to migration are the issues of human trafficking and remittances.

Looking Ahead into Climate Change and Other Complications

It can be expected that in the future (which is already present), migrations will occur with greater intensity due to climatological reasons and natural disasters in general. Climate changes and their prospects are forcing many to migrate. The search for elements such as water and its scarcity are often decisive, and will be even more so in the future.

Nuclear threats and technological domination are ingredients that complicate the scenarios of humanity, with potential wars of domination of humanity. But, they are not the only or the most perverse. There are others, perhaps more subtle but equally harmful, such as the human being’s own desire for domination to impose religious, ideological or quasi-ideological beliefs that hide the true desire for power of the human being. Perverse? yes, but real and contradictory with the real current needs of humanity that should be dedicating all its efforts to save and improve the living conditions of the human race.

Catastrophes and natural phenomena abound these days around the world, threatening and challenging it at every moment; Not counting the pandemic threat that has plagued the world for almost two years with COVID-19 and which may be followed by others of equal or greater magnitude if the irrationality of the human being continues to act.

However, the greenhouse effect (related to gas emissions that lead to increased temperatures) has been highlighted as the main cause, in particular, of climate risk. The rise in sea level is becoming a serious threat to millions of human beings on the planet, in contrast to other regions where the risk is more related to severe droughts.

The non-profit organization Climate Central has warned of areas / regions that can be submerged under water on a planetary scale. Indeed, it has been calculated that the rise in sea level would be between 0.6 and 2.1 meters over the course of this century, higher than previous estimates (referred to in the journal Nature Communications, 2019), thus it would put the habitat of 200 million people at risk by the year 2100, with its consequent migratory effects. In this sense, although the greatest risks of flooding (70% of people at risk) have been visualized in the Asian continent (China, India, Bangladesh, Indonesia, Thailand, the Philippines, Japan and Vietnam), it is no less true that other regions are also at considerable risk; In Latin America, areas of Mexico, Nicaragua, Honduras, Colombia, Venezuela, Brazil, Uruguay, Argentina, Guyana and Suriname stand out. Even European countries would be affected, and some have already been taking actions to mitigate the effects of climate change, although so far they are insufficient due to their magnitude.

The world development model, not only in the West, has been causing a good part of these evils. The deterioration of the environment is not only a problem generated by the West as it is frequently highlighted. The destruction of habitats in the seas and on land, as well as the exploitation of natural resources (including oil) are a reality that also reaches and promotes countries with a very different orbit from that of the West.

This scenario will demand important and greater actions to manage the migratory effects derived from these climatic changes, to which are added other reasons already mentioned above and no less relevant such as political conflicts, governance, opportunities for economic development, insecurity, violence. and corruption, among others. Regarding the latter, it is positive to observe the recent initial steps taken through the exchange of communications between the United States and Mexico to address the migration problem between the two countries, which has acquired emergency overtones, since it has far surpassed other migratory waves of the past that they have sought to settle in the US.

In any case, the complexity of the migration problem reaches other issues such as food, the fight against poverty, access to water, health, human rights, childcare, racial and xenophobic conflicts, and security. These are all challenges to face in a more turbulent world as a result of the exacerbation of migrations.

Overcoming the Contradictions of Our Times

While all this is happening or can be foreseeable, there are nations and influential people who seem to be more aware of interplanetary travel and greater domination, beyond politicians with no real vision about the future of the planet, as if there were no serious problems on the planet for solve, even if on other planets there were better conditions for human life or there were resources that could contribute to solving part of the problems we face on planet earth.

The truth is that more awareness and actions are required on the part of governments and world leaders to meet and overcome current challenges, in a ship that requires that we all be on board sailing towards the same place in favor of the objective of protecting the environment and humanity.

In this framework of “call to world conscience”, the serious problem of migration is an “earthly” problem that requires urgent attention to avoid greater evils.