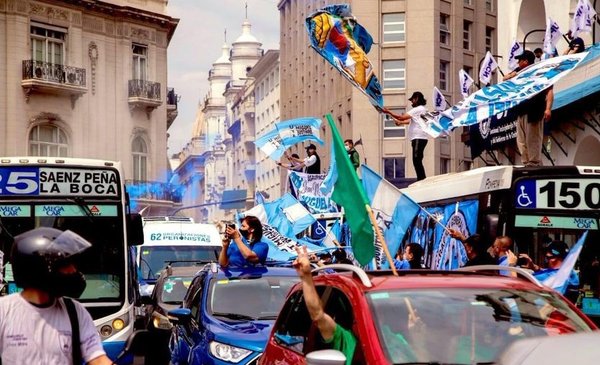 Leaders and activists of social, trade union, political and human rights organizations today supported the call made by the president of the Mothers of Plaza de Mayo Association, Hebe de Bonafini, to march to Plaza de Mayo next Sunday, October 17 with the purpose of commemorating a “Peronist Loyalty Day”, under the slogan “no to the payment of the foreign debt.”

Figures linked to Kirchnerism such as the sociologist Artemio López, the former ambassador Alicia Castro and the social leader Luis D´Elía will participate in this call, as well as militants from other Peronist groups.

“The idea is to seek spontaneity, a march from below and for free, accompanying the Mothers (of Plaza de Mayo), but where each of us will also have our own claims,” ​​a spokesperson for the organizers of this event told Télam. March.

Given the cancellation of the act for Peronist Loyalty Day by the Justicialist Party (PJ) due to the coincidence with the celebration of Mother’s Day, various groups and personalities called to march to Plaza de Mayo with various slogans, among them questions to the International Monetary Fund (IMF).

Meanwhile, the CGT ratified the decision not to march to the Plaza de Mayo and, instead, mobilize next Monday to the Canto al Trabajo monument, located on Paseo Colón and Independencia, to celebrate Loyalty Day with a concentration on that place.

“The IMF plugged us with the complicity of (Mauricio) Macri a debt of 44,000 million dollars, violating its own statutes. Therefore, the debt is illegitimate and illegal,” said the Association Mothers of Plaza de Mayo in the announcement calling the march for this Sunday, October 17.

For his part, Daniel Catalano, general secretary of ATE-Capital Federal, confirmed on Radio Gráfica that the union organization he represents will attend Sunday’s call, considering that the popular sectors “need to know how to pay that debt” that was contracted with the IMF.

“For me the Mothers, the Grandmothers and the CHILDREN are the moral reserve of the nation. They convened and I will go where Hebe (from Bonafini) and the Mothers tell me,” said D ‘Elía in statements to Télam.

The Intransigent Party (PI) and the Octubres Movement, led by the Peronist deputy in Parlasur, Gastón Harispe, also joined the call for Sunday.

“Once the plenary of the National Table met, the CTA of Workers decided to commemorate Loyalty Day by accompanying the call for next Sunday, October 17, starting at 4:00 p.m. that the Mothers of the Plaza de Mayo and other expressions of the popular field will carry out. “the organization reported in a press release.

For his part, Nahuel Beibe, general secretary of the National Current Martín Fierro, announced that they will mobilize on October 17 to Plaza de Mayo “along with thousands of Peronists, the Mothers of Plaza de Mayo and a wide space of popular organizations of the Frente of All “.

Finally, the Cabildo Abierto organization announced that it will also be in the Plaza de Mayo “in the preview of October 17”, on Saturday 16, from 18.

“On Saturday, October 16, at 6:00 p.m., ‘the preview of 17’ will start in Plaza de Mayo, with a large Open Council of the militancy and, from midnight, we will put the body to the vigil,” they announced to Télam industry spokespeople.

“We never left; let’s get together. The spiritual place of the Militancy is the Plaza de Mayo. Last year the pandemic prevented us from doing so. The celebration was physically absent from our square, this year nothing will be able to prevent it. A militancy that lives, debates and who is encouraged by his legacy and the future of all, says present “, they indicated from Cabildo Abierto.