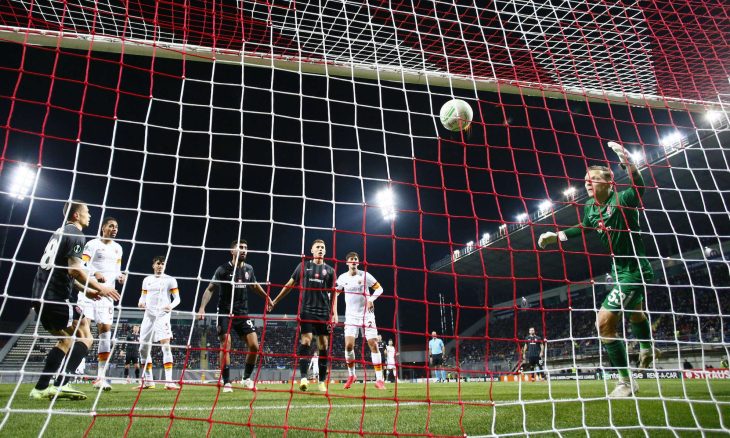 Berlin: Roma, Italy, defeated hosts Zorya Lugansk of Ukraine 3-0, today, Thursday, in the second round of Group C of the European Football Conference.
The goals for Roma were scored by Stephen El Shaarawy in the seventh minute, Chris Smalling in the 66th minute and Tammy Abraham in the 75th minute.
And in the matches of the same round in the third group, a goalless draw took place over CSKA Sofia, Bulgaria, and its guest, Bodo Glimt, of Norway.
Roma leads Group C with six points, two points behind Bodo Glimt, who is in second place, CSKA Sofia occupies third place with one point, and Zorya Lugansk is at the bottom of the standings without a balance of points.
In the first group, Finland’s Helsinki beat its Kazakh host Alashkert 4/2, while Israel’s Maccabi Tel Aviv tied its Austrian host LASK 1/1.
Maccabi Tel Aviv leads the group with four points, with a goal difference from second-placed LASK, while Helsinki is third with three points, and Alashkert is at the bottom of the standings without points.
In the second group, Serbia’s Partizan Belgrade defeated Estonia’s Flora Tallinn 2-0, while Belgium’s Gent beat Cypriot Anorthosis Famagusta by the same score.
Partizan Belgrade leads the group with six points, with a goal difference from second-placed Gent, while Flora Tallinn and Anorthosis Famagusta are third and fourth, respectively, without points.
In Group D, the Dutch Alkmaar defeated the Czech Jablonets 1-0, while the Romanian Cluj drew with the Danish Randers 1-1.
Alkmaar leads the group with four points, one point ahead of second-placed Jablonets, while Randers is third with two points, and Cluj is at the bottom of the standings with one point.
(dpa)

News of your work: E-passport will start soon in the country, police verification will not take much time, what is the announcement of the...