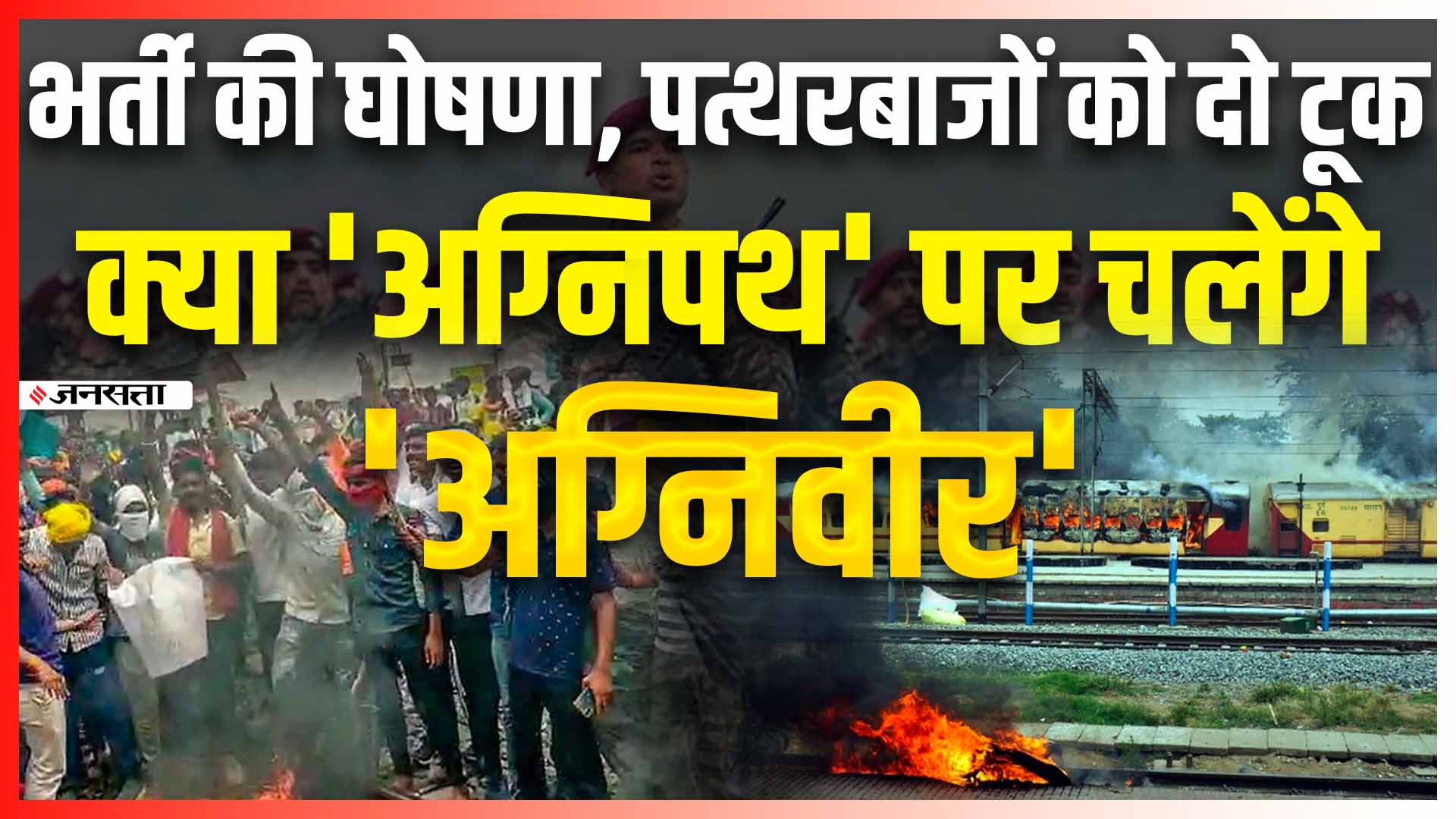 During the First and Second World Wars, a famous poster was put up on walls throughout America. It said, ‘I want you to join the US Army’. The man depicted wearing a hat on his head was affectionately called Uncle Sam. The Indian government could also try to issue a similar poster to promote the new scheme of recruitment of soldiers in the defense services. Although it may have needed to add a line in lowercase letters saying ‘to become a tailor, washerman or barber’.

Agneepath scheme is not only easy in reality, it is very simple. Forty six thousand jawans will be recruited every year for the three services. They will be trained for six months and then posted for forty two months. On completion of forty-eight months, one-fourth of the jawans will be retained to serve for eleven to thirteen years and the rest (about thirty four and a half thousand) will be freed after catching the eleven lakh sixty seven thousand rupees that they will get on completion of the job. There will be no guarantee of job, no pension, no gratuity and no medical facility or other benefits.

do it, think later
The flaws in this plan were obvious and natural. It is admitted that such an idea has been imposed from the very top level. This is the way the government has been working since 2014. Earlier examples include demonetisation, the Rafale deal, amendments to the Land Acquisition Act and three agricultural laws.

As was expected, protests were bound to take place and most of them were young men who had trained and prepared for regular recruitment in the defense forces, but this recruitment was canceled more than once because of the pandemic. Many of these youngsters have crossed the age of twenty one set for Agneepath. As soon as the protests erupted, the government announced some changes one by one and shamelessly called these changes pre-planned. There was nothing in these changes that would have addressed the original objections raised about Agneepath.

First, about time. At present, the security situation along the entire border remains extremely risky and there is no end to the attacks from the Chinese side and Pakistani incursions. One should put up one’s roof only when the sun is out, not when it is raining.

Second, the training of Agniveers will be very weak and they will not be able to be deployed on the front lines. Admiral Arun Prakash has pointed out that a normal jawan is trained for five-six years. Moreover, as the Navy and Air Force are increasingly technology-driven, no sailor or airman can be trained in six months.

Retired Lt Gen PR Shankar, who has retired as Director General of Artillery, cited statistics in an article to argue that when the Agneepath scheme is fully implemented in India, it will have personnel who can operate weapon systems like BrahMos, Pinaka or Vajra. Will be unable to get, nor will they be becoming good gun runners. He dubbed it the ‘Kindergarten Army’.

Thirdly, it has been pointed out by many eminent defense officers that a combat soldier should live with pride in his unit and not in risky situations and should have the ability to lead in times of crisis. Nothing is found in any book related to human resource, which can inculcate all these qualities in a jawan in six months of training. The training of a police constable is also much more than this.

Fourth, the defense forces, especially the army, have their own traditions and temperament. A jawan should be ready to lay down his life for his country and his comrades. The regimental system may be ancient, but it has made India’s army one of the best armies in the world. Over the course of four years in the service, Agniveer would find that seventy-five percent of those soldiers would be unhappy (who would not have the status of ex-servicemen) at the end of the job, and also financially insecure. Will there be camaraderie or competition among such jawans during these four years? How can you expect such a soldier to be ready to make the supreme sacrifice when the need arises?

Fifthly, imagine the consequences of ignoring quality, efficiency and effectiveness for the country’s economy. Huge pension bills are indeed a problem, but there is no evidence that other alternative forms have been scrutinized. The argument that the Agneepath model has been tested in Israel is childish.

Israel’s population is small, there is practically no unemployment and military service is compulsory for young people. Why not pilot it and test it before opening Agneepath to the public and making it the sole source of recruitment in the three services? Now the Deputy Chief of Army Staff, General Raju has said that Agneepath is a pilot project and it will be improved after four-five years!

contract army?
The so-called changes and concessions that the government has made do not answer the basic questions of whether substandard training, weak motivation and legally contracted defense forces will not seriously damage the security of the country. 10 per cent reservation for out-of-service Agniveers in Central Armed Police Forces, Defense Establishments and Central Public Establishments is not the answer.

According to the Directorate General of Rehabilitation (as the Indian Express wrote on June 21, 2022) the existing reservation for Group-C posts for ex-servicemen is 10 to fourteen and a half percent and for Group-D twenty-four and a half percent for Group-C. The actual percentage of employees employed in the post of Group-D was 1.29 (or less) and 2.66 (or less) in Group-D posts.

If amendments were necessary for recruitment in defense forces, the way to make these changes would have been to publish a status paper, list the issues, find alternative solutions, consider the matter in a standing committee of parliament, in parliament. Discussions were held and then a law was made or a plan was brought. The badly designed Agneepath scheme should be withdrawn and the government should work on it again.