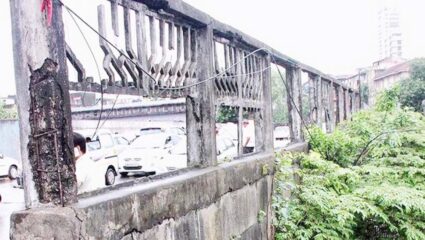 Mumbai: Seeing the urgent need to remove the nearly 150-year-old Karnak bridge between CSMT and Masjid railway station, the Railways has informed the Mumbai Police and BMC.

South Mumbai’s Karnak Bridge, built nearly 150 years ago during the British era, is in a dangerous condition. Built in 1867, this bridge is in very dilapidated condition and heavy vehicles are prohibited.

The Hancock Bridge is open.

Hancock Bridge has been renovated by MCGM and opened for public use from August 1. Keeping this in mind, Railways has asked to issue necessary NOC for closure of Karnak ROB.

Railways has contacted Mumbai Police and BMC. ROB will be circulated as soon as NOC is received. Central Railway will have to take several blocks to break this railway overbridge.

Realme 9i 5G launched in India with laser light design. |...

Paresh at the ceremonial opening of the kitchen in the hospital ...

Leopard | A leopard was spotted near Katol-Nak, people panicked,...

Cricket fans spend up to AED 1,000 for Pakistan-India match in...

Realme 9i 5G launched in India with laser light design. |...