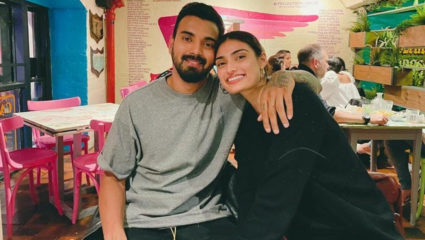 Mumbai: The news of the marriage of cricketer KL Rahul and Bollywood actress Athiya Shetty is making the market of rumors hot. KL Rahul and Athiya, who have been together for some time, will reportedly tie the knot later this year. According to reports, the couple’s winter wedding will be in traditional South Indian style, from time to time sharing cute, love-filled posts on social media. Both Athiya and Rahul, who are currently leading Lucknow Supergiants in the IPL, are from Mangalore.

A few days back, there were reports that the couple had rented a sea-facing 4-BHK apartment on Carter Road, Bandra. Reports also state that the rented apartment will cost Rs 10 lakh per month. Now a new report by ETimes suggests that the couple has finally found their love nest which is a full floor (9th to be exact) in a building in Pali Hill in Mumbai. Athiya and KL Rahul will house themselves in a building called Sandhu Palace and it is just 2 buildings away from Vastu, post-wedding Ranbir Kapoor-Alia Bhatt’s home, until they shift to Krishna Raj, according to ETimes, When it’s ready to live. ,

Let us tell you, Athiya Shetty and KL Rahul have been dating each other for more than three years and made their relationship public only about a year ago. Last year, KL reached the screening of Ahan Shetty’s debut film Tadap with the Rahul Shetty family. The appearance marked the couple’s first public appearance together.

Stock market: SIP fund stable despite the fall in the stock market in April – investors trust in SIP despite the weakness in the...

Anis’s father demands CBI: He will go to the Supreme Court instead of CBI to investigate his son’s death, said Anis’s father. Anis...

From cooking pizza to coffee with friends: What does Sachin Tendulkar do off the field? ProIQRA News