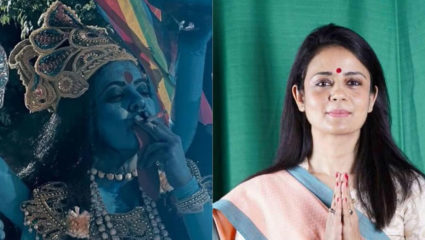 FIR registered against TMC MP Mahua Moitra in Bhopal over her alleged controversial statement on Goddess Kali. Case registered under section 295A of IPC for hurting religious sentiments

However, Mahua Moitra retaliated on this and wrote in her tweet that, “BJP I am a ‘Kali’ worshiper. I’m not afraid of anything. Not even because of your ignorance, goons’ loudness and police. I am definitely not afraid of you. The truth never needs anyone to come forward.”

“Bring it on BJP! I am a Kali worshiper. I am not afraid of anything. Not your ignores. Not your goons. Not your police. And most certainly not your trolls. Truth doesn’t need backup forces,” tweets TMC MP Mahua Moitra pic.twitter.com/ArAEYQ9RiQ

Significantly, Trinamool Congress (TMC) MP Mahua Moitra had courted controversy on Tuesday by saying that just as every person has the right to worship the deities in their own way, in the same way. As a person, he also has every right to imagine Goddess Kali as a meat-eater and one who accepts alcohol.

On the matter, BJP hit hard on Moitra for this statement. At the same time, West Bengal’s ruling party TMC distanced itself from this remark and also condemned it. Significantly, filmmaker Leena Manimekalai shared the poster of the film ‘Kaali’ on social media on July 2. In this poster, a woman wearing the form of ‘Goddess Kali’ is shown smoking a cigarette. Apart from this, some other objectionable things have also been seen in it. This poster is now being widely opposed.