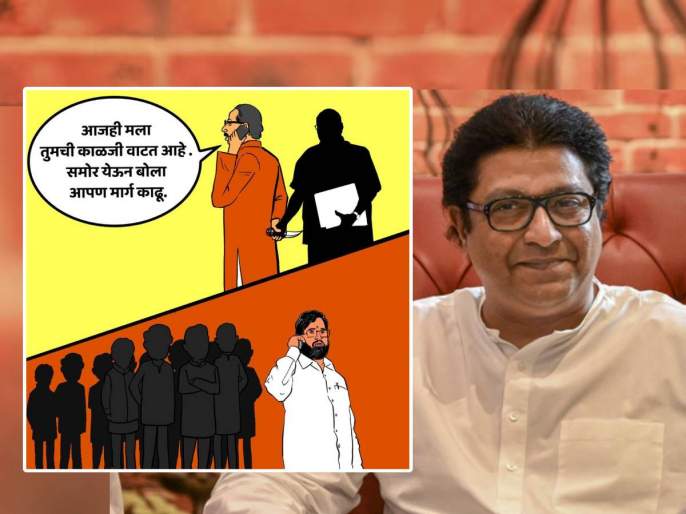 While the historical struggle for power is going on in the state, the MNS has left no chance to target Shiv Sena and NCP with the current political situation. Eknath Shinde and other rebel MLAs have gone to Guwahati. Yesterday, Chief Minister Uddhav Thackeray issued a statement urging him to come back to the party and have a face-to-face discussion. In this, Uddhav Thackeray, as the head of his family, made an emotional appeal to the rebel MLAs of Shiv Sena that they care about you. MNS leader Sandeep Deshpande has targeted Uddhav Thackeray and Sharad Pawar on this issue.

Click here for Live Updates of Political Events in the State

Sandeep Deshpande tweeted a caricature on his Twitter handle showing a letter requesting Uddhav Thackeray to return to the rebels. At the same time, a security is shown in the hands of Uddhav on the back and this security is portrayed as indirectly handed over to Uddhav by NCP President Sharad Pawar. On the other hand, the picture shows the support of the MLAs along with Eknath Shinde. Sandeep Deshpande has used the hashtags care and victimcard for this cartoon.

Chief Minister’s emotional appeal
Shiv Sena chief Uddhav Thackeray appeals to Shiv Sena MLAs in Guwahati to return. I am worried, it is not too late, come forward and talk, we will find a way, Thackeray assured the MLAs. You are stuck in Guwahati for the past few days. Every day new information is coming out about you, many of you are also in touch. You are still in Shiv Sena at heart. The family members of some MLAs have also contacted me and conveyed their sentiments to me. As the head of the family of Shiv Sena, I respect your sentiments.

shinde replied
“On one hand his son and spokesperson Vandaniya Balasaheb’s Shiv Sainiks were called pigs, drain filth, reda, dogs, goths and dead bodies. This question has been asked by Eknath Shinde via Twitter. Also this time with a new hashtag #donttrickmaharashtra used.