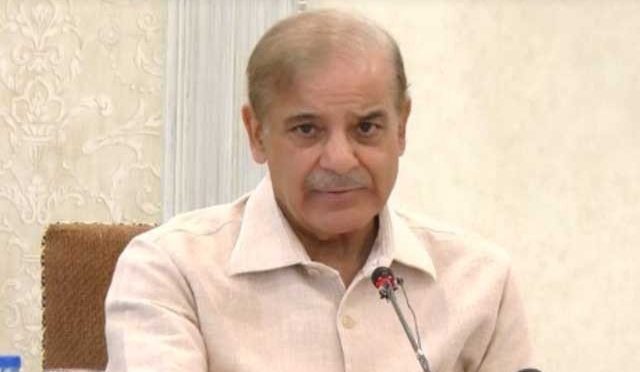 Islamabad: (Web Desk) It has been decided to set up a National Flood Control and Coordination Center to deal with the flood situation in the country and to rehabilitate the victims.
The meeting chaired by Prime Minister Shehbaz Sharif was attended by government coalition parties, Army Chief General Qamar Javed Bajwa and heads of all institutions including federal ministers.
At the joint meeting of the government coalition parties, a detailed review of the situation caused by the catastrophic floods in the country was made, after mutual consultation at the meeting, a “National Flood Control and Coordination Center” was established to deal with the flood situation in the country and to rehabilitate the victims .It was decided to do.
The meeting explained that in 60 years there has not been such a disaster as a result of the recent rains and floods across the country, especially in the province of Sindh, Balochistan, Khyber Pakhtunkhwa, South Punjab and Gilgit-Baltistan. The meeting appreciated Prime Minister Shehbaz Sharif’s tireless efforts for rescue, emergency relief measures, continuous visits to flood affected areas and provision of uninterrupted support to the flood victims.
According to the announcement, the federal government has released Rs 5 billion to NDMA, Rs 15 billion to Sindh province, Rs 10 billion to Balochistan province and a special allocation of Rs 10 billion to the flood victims. Tributes were paid to the family of deceased person for giving 10 lakh rupees, compensation for injured, house and other damages.
In addition to this assistance, the meeting strongly commended the Prime Minister’s initiative to immediately provide 25,000 thousand rupees in cash to each person affected by the flood. , while paying tribute to all the people involved in the provision of emergency relief, including central and provincial institutions, the army, navy, air force, saluted the national spirit of helping the flood-affected people day and night.
The meeting thanked the international partners, the international community, the United Nations, the development organizations, especially the friendly countries, for dealing with the natural disaster and hoped that they would fully support the relief and rehabilitation process for the flood victims.
The joint meeting expressed full solidarity with the flood victims and expressed their firm determination that the coalition government will not leave China or leave them alone until the flood-affected brothers, sisters and children have been relocated to their homes. , will use all possible resources to restore the victims’ lives to normal.
The meeting approved the proposal to prepare a comprehensive plan for reconstruction at the national level in view of the large-scale disaster caused by the floods, the final assessment of the losses in consultation with the provincial governments and the institutions under the leadership of the federal government To be carried out in a transparent manner and effective planning with a clear time frame for the rehabilitation of the victims.
The meeting also approved the proposal to draw up a comprehensive strategy for the future by learning from climate change risks and the current situation to ensure preparedness as much as possible. Apart from eliminating illegal constructions in rivers and watercourses, necessary steps should be taken to increase the capacity and efficiency of administrative machinery. Planning should be done to secure the flood water.
The joint meeting of the ruling coalition parties also agreed to carry out a vigorous campaign to collect donations from inside and outside the country while supporting Prime Minister Shahbaz Sharif’s decision to set up the Prime Minister’s Relief Fund 2022. In this regard, a movement will be launched at government, party- and individual level so that the flood victims’ rehabilitation work can be completed with the support of philanthropists, institutions, international partners and friendly countries.