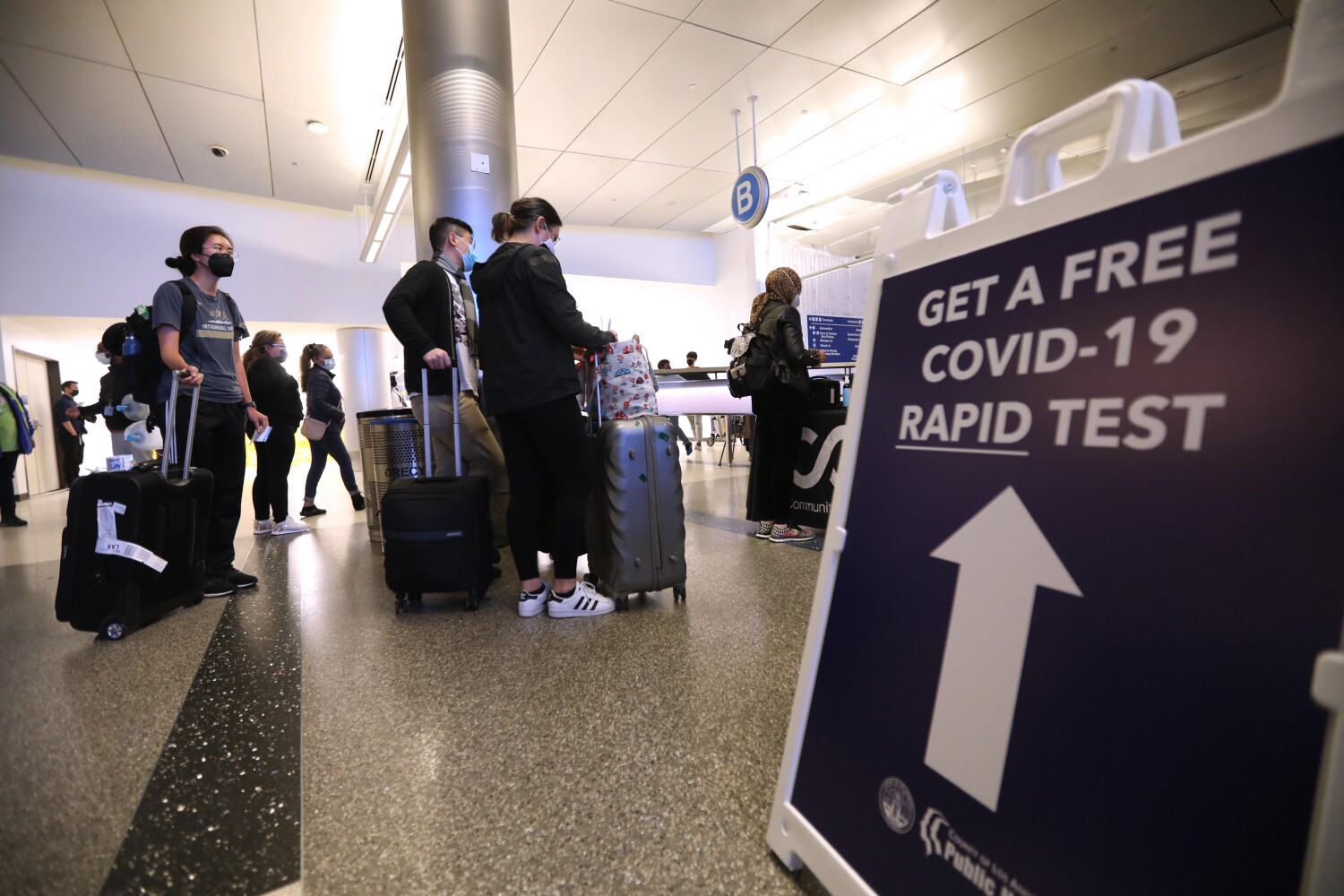 Just as the Omicron variant is making its way into California, tens of thousands of college students are preparing to travel away from their relative campus bubbles for winter break, a worrisome rite of exodus that has administrators on edge, doubling down on booster shot efforts and planning for more coronavirus testing when the new term begins.

So far, the variant’s California arrival has not upended any universities’ back-to-campus plans in January, but administrators said they are closely monitoring the data and are reluctant to make predictions about the months ahead.

Concerns came to the forefront this week when a USC student who had traveled to the East Coast over Thanksgiving was identified as among the first confirmed Omicron variant cases in Los Angeles County. It’s still too soon to know how transmissible or severe the variant is, but early indicators suggest that though it may be highly transmissible, its severity may be low compared to the Delta variant. Health experts expect to know more around Christmas — right in the middle of winter break.

“Could the timing be worse? Hard to imagine that it could be,” said Dr. Kirsten Bibbins-Domingo, chair of UC San Francisco’s Department of Epidemiology and Biostatistics. “Even before Omicron, I have been concerned that the wonderful sets of things working to keep colleges under control are going to be disrupted at a time when people are traveling across the country.”

The fear that students, who have been following guidance set by campuses, will leave their bubbles, contract the virus elsewhere and bring it back to the community stems from last year’s reality, when outbreaks on college campuses were tied to community spread.

But the biggest concern remains the need for students — and the general public — to get fortified against the virus as health departments throughout the state prepare for the possibility of a winter surge.

At USC, where 96% of students, faculty and staff are vaccinated, the university saw an uptick in breakthrough cases after the Thanksgiving break. The cases, such as the student with Omicron, are believed to be partially tied to travel and to timing.

“We actually think most of our students were vaccinated in April and May,” said Sarah Van Orman, USC’s chief student health officer. “We’ve been really stressing the boosters — certainly, we know some students got them later in the summer, but many of them are at that six-month mark.”

Students are currently required to get tested for the virus once a week, regardless of vaccine status, to detect these breakthrough cases. Van Orman does not anticipate an increase to surveillance testing, but does believe booster shots could be required on campuses in the future as more cases at USC, in L.A. County and across the U.S. are expected. No booster decision at USC has been made yet.

“I don’t make any predictions about COVID — I’ve learned that over the last 21 months,” Van Orman said. “We don’t think we’re going to have any more significant data until later this month — but we will be nimble.”

Other university administrators expressed similar plans: They will continue to monitor the situation around Omicron and cases in general, evaluate the data and stress the need for booster shots and vaccinations.

“First of all, we don’t know if Omicron is worse than Delta,” said Dr. George Rutherford, a UC San Francisco epidemiologist and infectious disease expert. “There are still several overriding questions. One, is it more severe? Two, does the vaccine works as well — how well or poorly? And three, is this in fact more transmissible? If it’s less severe, who cares if it’s more transmissible?”

UC President Michael V. Drake said he hoped that the Omicron variant will not set back campus efforts to return to in-person campus instruction. He said students, faculty and staff have done a “wonderful job” understanding their responsibilities to get vaccinated and follow safety protocols, such as wearing masks indoors. Among UC’s more than 530,000 students and employees, 94% were fully vaccinated as of Dec. 3; the rate is 96% among students.

“I believe that mask wearing indoors, being vaccinated … having adequate ventilation inside our buildings, that those things will minimize the spread of the virus,” Drake said during a forum last week sponsored by the Los Angeles World Affairs Council and Town Hall. “And over time … you’ll be protected against severe disease and also minimize the spread. And that’s what we all have to do to help this go away and our efforts are to spread that as far and wide as we can.”

UC San Diego for example, is requiring all students, regardless of vaccination status, to get tested after traveling, and unvaccinated students who traveled internationally will also be required to self-quarantine for seven days upon their return. UCLA is recommending the same regimen — but not mandating it. UC Davis has continued to require vaccinated individuals to get tested every 14 days, but at this time is still planning to lift that rule in late January — two weeks after students return to campus. UC Irvine will require all unvaccinated students living on campus to get tested within 48 hours of their return from winter break and again five days later and to self-quarantine for seven days with two negative tests.

Esmeralda Quintero-Cubillan, UC Student Assn. president, said student leaders have been in discussions with the university about January return preparations.

No UC campus has plans to return to remote learning, although many courses this term have been online.

California State University said it’s also continuing to monitor the situation around the variants and continues to advise campus communities to get vaccinated. Cal State Los Angeles said that if any new guidance is issued, the university will act swiftly.

Cal State Fullerton senior and Cal State Student Assn. president Isaac Alferos said that although he was anxious to return to campus after a months-long hiatus, he and other students have felt generally safe, even with the discovery of a new variant.

Bibbins-Domingo said it’s possible universities may have to shift plans in the winter months due to waning immunity and a need for better protections. But “the extent to which they shift will depend on vaccination rates — and what this new variant throws at us.”

The New York Times: The United States hit the Syrian Tabqa Dam with 2,000-pound bombs, and it almost caused a disaster