Pakistan flood: Where Ghinji settlement was in March, there is now only water. It is impossible to understand that people once lived here, because everything was washed away by flood waters. 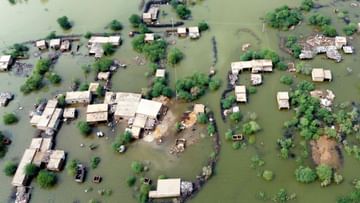 Islamabad: When a neighboring country is experiencing a terrible drought, another country is struggling to cope with a flood situation due to incessant rains. Pakistan has been inundated by heavy rains for the past three months. Currently, three parts of the country are under water. The number of flood victims exceeded 1,100, and at least 3.33 million people were affected. The last time Pakistan witnessed such a terrible flood was in 2010. That year, more than two thousand people died from the flood. Residents of this country fear that the situation with floods may become more dangerous.

Due to the incessant rains that started in Pakistan since June last year, such a terrible flood occurred. Most of the cultivated lands and the crops on them have been washed away and cleared. At least several hundred houses were damaged. Many villages in the northern hilly areas of the country were also swept away by floodwaters. A major bridge in the Khyber Pakhtunkhwa region was also swept away by floodwaters.

Several satellite images have already appeared. Comparing the picture from the same day last year with the picture this year shows the strength of the flood. Where the Ginji settlement was in March, now there is only water. It is impossible to understand that people once lived here, because everything was washed away by flood waters. As the southern and western parts of the country are relatively less affected, people are flocking there to save their lives from the floods. They got new homes and families near highways and railroad tracks.

On the one hand, Pakistan is going through a very difficult time due to the economic crisis, in addition to the terrible floods. The government has already declared a state of emergency. The administration of Pakistan also asked for international help. The United Nations on Tuesday announced an emergency fund of $16 million. Next week, representatives of the UN will come to Pakistan to check the flood situation with their own eyes.

The interior minister will not tolerate Imran Khan’s pressure on...