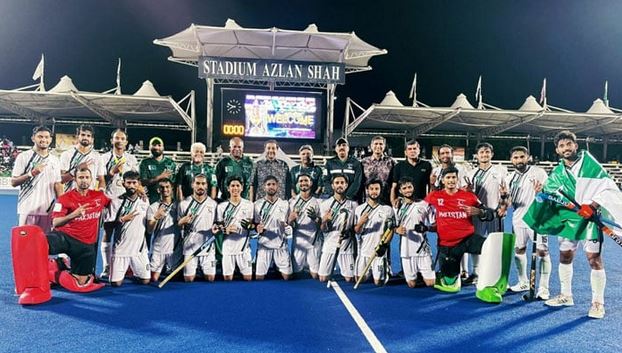 Iboh: (Web Desk) In the Sultan Azlan Shah Hockey Cup, Pakistan defeated Asian champions Japan 3-5 to reach the podium after 11 years in the competition.
The third and fourth place match was played between Pakistan and Japan in the Sultan Azlan Shah Hockey Cup played in Ebuah, Malaysia.
In the match, Pakistan defeated Japan by five goals to three in a thrilling match.
On behalf of Pakistan, Hanan Shahid scored a field goal in the 11th minute, Afraz Ahmed scored a penalty corner in the 18th minute, Roman scored 2 field goals in the 27th and 31st minutes, while Rana Abdul Waheed scored a field goal in the 53rd. minute.
On behalf of Japan, Kentaro scored 2 goals in the 10th minute, while Yuma scored 2 goals in the 31st and 50th minutes.
After 11 years in the competition, Pakistan managed to win the bronze medal by securing the third position.
Earlier, Pakistan played the final against Australia in 2011.
It should be remembered that 9 talented and young players of Pakistan Hockey Team started their international career from this event and showed excellent performance in the event.
After 11 years, the Pakistan hockey team reached the Victory Stand and celebrated in the bus as they returned from the stadium, dancing to the song Nagan Nagan.
Six teams participated in the event, including host Malaysia, Pakistan, Japan, Korea, South Africa and Egypt.
The final of the Sultan Azlan Shah Hockey Cup will be played tomorrow between the host team Malaysia and Korea.

The ECP calls a meeting to discuss options | Pro...

“Elected Congressmen will protect the interests of the people, the...

America has included Pakistan among the countries that violate religious...

Russia’s refusal to accept the price of gasoline set by...

The ruling party Tehreek-e-Insaaf defeated in the second phase of...

The ECP calls a meeting to discuss options | Pro...

Where does Tyson Fury vs Derek Chisora ​​fight take place? ...

A man suffers a broken arm after being beaten with...

“Elected Congressmen will protect the interests of the people, the...

The Aston Villa star has asked to be ‘out’ ahead...

America has included Pakistan among the countries that violate religious...