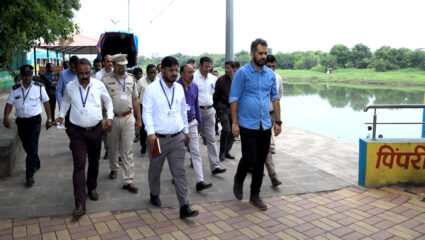 Pimpri: Against the backdrop of Ganeshotsav, Pimpri-Chinchwad Municipal Corporation Commissioner Shekhar Singh inspected the site of the final phase of the ongoing cleaning work of Ganesh Visarjan Ghat. He directed the administration to ensure that there is no shortage in the service facilities provided by the municipal corporation on the Ganesh procession road and the immersion ghat. This year, Ganeshotsav will be celebrated in an atmosphere of enthusiasm and a large number of devotees are expected to visit the ghat for Ganesh Visarjan. Apart from this, the number of processions for installation and immersion of Ganesha is likely to increase. Against this background, the municipal administration is preparing for hostilities.

Look at these Ghats