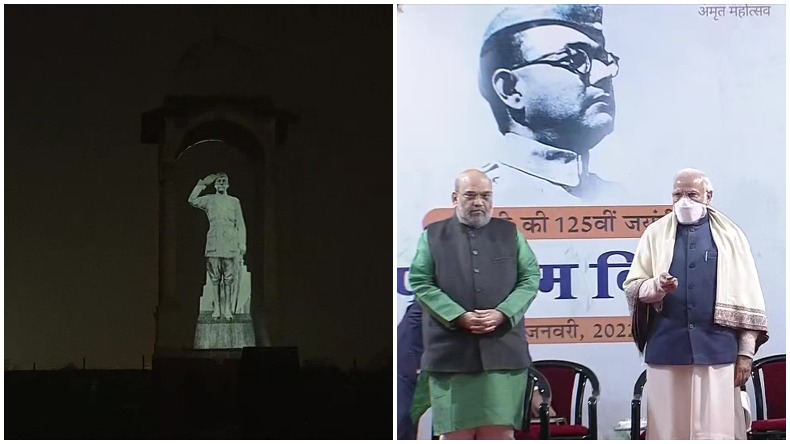 Let us tell you that on January 21, PM Modi had announced through his Twitter account that a grand statue of Netaji Subhas Chandra Bose would be installed at India Gate and till his statue was ready, there would be A hologram statue of him will be installed.

After unveiling the hologram, PM Modi said that the grand statue of our Netaji, who had established the first independent government on the soil of India, is being installed in digital form near India Gate and soon he will have a granite stone at this place. There will also be a huge statue. Speaking on disaster management, PM Modi said that whatever happened after the 2001 earthquake in Gujarat changed the meaning of disaster management. Our government has thrown all the departments and ministries into the rescue work. After this, the State Disaster Management Act was enacted in the year 2003 in Gujarat.

PM Modi said that the government has laid emphasis on relief, rescue and rehabilitation as well as on reform. We strengthened, modernized, expanded the NDRF across the country. From space technology to planning and management, best possible practices were adopted. Prime Minister Narendra Modi also presented the ‘Subhash Chandra Bose Aapda Prabandhan Puraskar’ for the years 2019, 2020, 2021 and 2022 after the cover of the hologram. A total of 7 awards were given under this.

Follow us for the latest news of the country and the world Facebook,Twitter

The debate of ‘saffronisation of education’ is gaining momentum in Karnataka, the opposition is also continuously attacking Pi News

Deadly thunderstorms, high winds in the Waterloo area, leaving a trail of damage in the Giulp area Pi News

George Rox, a former Calgary police officer, has died at the age of 74 Pi News

Wedding Fashion Tips: If you want to look stylish in a friend’s wedding, then take tips from the white lehenga of these actresses Pi...

In Cannes 2022, the Iranian film Holy Spider ignites foul smoke inside and outside the theater. ProIQRA News