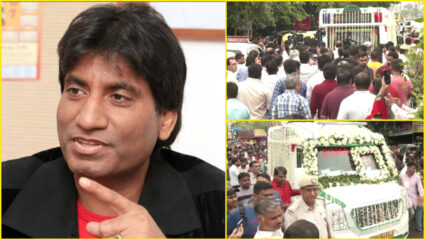 Mumbai: Actor-comedian Raju Srivastava has been battling life for the past one and a half months. But he died on Wednesday, that is, September 21, 2022. 40 days ago, he suffered a heart attack while training at a gym in Delhi and was admitted to AIIMS. Since then he was treated by a team of doctors, but Raju Srivastava died during treatment. He underwent angioplasty and was on a ventilator for the last 40 days.

Farewell to the comedian will be held today at Nigam Bodh Ghat in Delhi. This was confirmed by his family after the death of Raju Srivastava. Raju’s final journey has begun. The comedian’s latest journey started from Dashratpuri. Some photos related to this have appeared. It shows that the carcass is decorated with white flowers. Apart from the family, many celebrities came to say goodbye to him. Look at these pictures –

According to information, Raju Srivastava collapsed on the treadmill while training on the morning of August 10. This time he immediately got into AIIMS. At that time, he was on a ventilator in the intensive care unit of the hospital. After that, he also underwent angioplasty. After that he did not regain consciousness. According to official sources at the hospital, Raj Srivastava was declared brought dead at 10:20 am on Wednesday.

Nagaon: Dead bodies were recovered on the 10th day of...