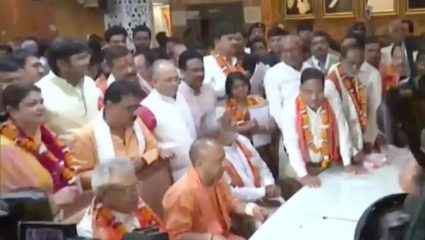 Lucknow: The Bharatiya Janata Party has started realizing the target of the Lok Sabha elections to be held in 2024. In the eight candidates named by the BJP for the Rajya Sabha from UP, special attention has been paid to the candidate’s dedication and loyalty towards the organization with regional and caste balance. The candidates have filed their nominations in the assembly in the presence of Chief Minister Yogi Adityanath and it is believed that all the candidates are sure to be elected unopposed.

Dr. Laxmikant Bajpai, who hails from Western Uttar Pradesh, has been the President of BJP Uttar Pradesh. In the Lok Sabha elections held during his tenure, the BJP got the maximum 75 seats in the state. He has also been MLA and former minister from Meerut Sadar seat four times. Darshana Singh, who represents women, is the national vice president of BJP Mahila Morcha and she has also been the state president of Mahila Morcha. In view of his contribution in the elections, the party has made him a Rajya Sabha candidate.

Sangeeta Yadav was elected MLA for the first time in the last election from Chaurichaura seat of Gorakhpur. BJP has also made him a Rajya Sabha candidate from UP. She could not contest the elections as her seat went to the account of the Nishad Party in the alliance. Therefore, the party has made his adjustment for the Rajya Sabha. At present, she is also the National Minister of BJP Mahila Morcha.

Participates in the nomination process for Rajya Sabha members in the Legislative Assembly #UPCM @myogiadityanath pic.twitter.com/2vpiVLsnbZ

Dr. Radha Mohan Das Agarwal (Pediatrician) also comes from Gorakhpur. He had to leave the seat in Gorakhpur city, from where he has been MLA for four consecutive terms, due to Chief Minister Yogi Adityanath contesting the assembly elections. Apart from this, Baburam Nishad is the chairman of State Backward Classes Finance Development Corporation. Surendra Nagar is a big face of Gurjar society in the party and he was already a member of Rajya Sabha. The party has given him another chance. Mithilesh Kumar comes from the Dalit community. Apart from this, it has also been decided to send National President of BJP Backward Classes, Dr. K Laxman, who lives in Hyderabad, to Rajya Sabha from Uttar Pradesh.

‘Difficult’ to See ISIS-K and Al Qaeda Targets in Afghanistan

New condition for government employees, important announcement of the government

Let the IMF hear that it is not bound by the agreements made with the previous governments, Maulana Fazlur Rehman Pi News

If Putin was a woman, there would be no war in Ukraine: British Prime...

Internet ban continues in the state; In protest against the incident, Jagannath Rath...

The government is trying to get the IMF to pay as much as the dollar, Imran Khan said Pi News