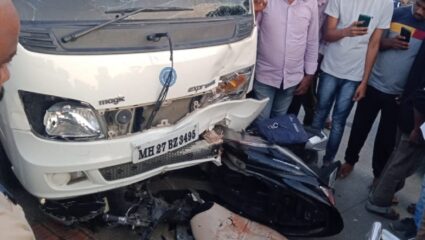 YavatmalOn Pandharkavada road of Yavatmal town, a speeding illegal passenger vehicle crushed the Activa of a student who was returning home from school, in this accident a student named Jora Anis Sheikh Rahim Sheikh was seriously injured, after this accident an agitated gathering The Illegal Passenger car was set on fire vehicle Magic Express The accident occurred on the highway opposite the under-construction Jannat Palace on Pandharkavda Road at 5:00 pm on Friday, September 23.

According to the information received, during this horrific accident, Jora Anis Sheikh, a resident of 17 Zafar Nagar Pandharkawada Road Yavatmal, sustained serious injuries on her body, including both legs of this student, she was immediately sent to a private hospital with the help of citizens, where the condition of the student is assessed as critical. The information came late in the evening. After this accident there was tension in this premises, as soon as the city police received information about the accident, the police reached the spot and brought the situation under control.

According to the information received, this student, Jora Anis Shaikh, who studies in a local school, was returning from a black Activa car to a house located in Zafar Nagar after finishing school, through the turn of the dividing road, she was returning to the Zafar Nagar mode. , then the driver of the vehicle number MH 27 BZ 3495, which was carrying illegal passengers going from Jodmoha towards Yavatmal, hit the Activa car of the girl student at high speed.

During this he was caught by people and also the angry crowd threw the passengers out of the vehicle and set fire to the vehicle, due to this accident there was a commotion in the premises, after receiving the information about the accident to the city police station, the police After arriving at the spot and investigating, the vehicle fire was liquidated by the forces of the fire department. In this case, the police took possession of the vehicle, registering a crime against the driver at the city police station. The incident is being investigated by the city-district police department.