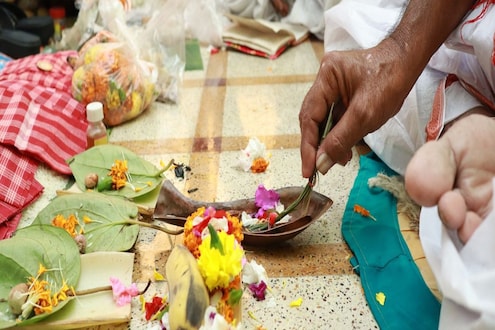 Mumbai, September 25: Patrapaksha starts from last 15 days. Now on Sunday i.e. September 25, Patrapaksha will end with Sarvapati Amvasya. On this day, gratitude is expressed for the ancestors. Is Sarvapati Amavasya auspicious or inauspicious? Is there anything important to do on this day? Is the new moon bad? Do more negative events occur on Amavasia? Common people have many questions about Amavasya. Today we are going to find out if amavasia is really offensive?

‘Ama’ means together, ‘vas’ means stay. It is said that ‘Surya Chandramasuraya: Para: Snikrsha: Samavasya’ means extreme proximity of Sun and Moon should be called Amavasya. At Amausia, the Moon and the Sun come in the same line with respect to the Earth. After that, the angular distance of the Moon from the Sun increases to the full Moon during Shukla Paksha. It was only 180 degrees on a full moon. The angular distance between the Moon and the Sun decreases in Krishna Paksha.

Why do you wear a headscarf and headscarf at a religious place? Why is it important to cover the head in worship?

Almanac and Astronomer Dr. According to information given by Kr Soman on Facebook, Amavasya is also defined in an ancient text as the date when the moon is not visible. Amavasya is not mentioned in Rigveda. But solar eclipses occur only on Amavasya and solar eclipses are mentioned in Rigveda. In the Atharvaveda there is a sutta related to Amvasya. Currently, some people consider Amavasya to be inauspicious. But Amavasya was considered auspicious in ancient times. In the Atharveda Sukta Amavasya it is said “All the gods come to me and live in my place. I got the name Amavasya because Siddhyadi Deva and Indraparamukh Deva lived with me.”

Amavasya is mentioned in the Ramayana.

“May the night of the new moon be prosperous to us.” It is also said in a Sukta. It is also mentioned that Ramayanakali considered Amvasya to be auspicious. Ravana’s sage Amatya named Suprasva told Ravana, “Today is the Chaturdashi of Krishna Paksha, so prepare for battle today and take your army with you and set out for victory tomorrow on the new moon.”

Amvasya is mentioned in the Mahabharata.

In the Mahabharata, however, Amvasya is considered auspicious at certain places. In some places it is considered indecent. Krishna, declaring war near Karna, says, “The seventh day from today is Amavasya. Indra is its deity. On this day the war will begin.” He mentions a yoga called ‘Triudasikta Amvasya’. It was the same during the Indian war. This is what he said at the same time. At one place in the Mahabharata, Amvasya is mentioned as ‘a terrible moment’. done on

There are two types of Amavasya.

There are two types of new moon. One is ‘Sinivali’ and the other is ‘Coho’. “Ya purva amvasya sa sanivali . Ya atara sa kho:” is the verse. That is, the new moon with Krishna Chaturdashi is called ‘Sunivali’ and the new moon with Shukla Pratipada is called ‘Kohu’. This has been said in many ancient texts. Do five parts of the daily routine. It is said that the first part is dawn, the second part is Sangvakal, the third part is noon, the fourth part is afternoon and the fifth part is evening. It is said that the Amavasya Shraddha Darsha should be performed on the Amavasya on which the new moon occurs in the Aparana. Bathing in the river on Amausia was also practiced in ancient times. In many places in India, sun worship and fasting on Amavasya are also practiced.

– If the new moon falls on a Monday, it is called ‘Somati Amvasya’. On this day, women worship Ashwath and offer him 108 items.

– Amavasya in Ashhad is the ‘new moon of light’. Deep Pooja is performed on this day.

– Amavasya in Ashwin is considered auspicious as the ‘new moon of Lakshmi Puja’.

Interesting dialogue on the third day of World Urdu Conference ...

German Consul General’s message to the people of Sindh |...

Netherlands reach quarter-finals after defeating USA in Round of 16...