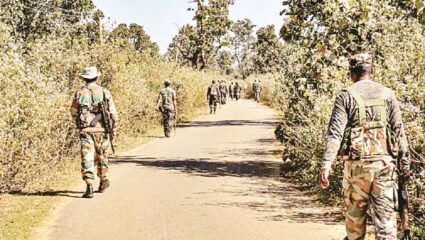 Gadchiroli, While conducting an anti-Naxal operation, a soldier also fired bullets at his colleague. A jawan was injured in the incident and was referred to Nagpur for treatment. The name of the injured jawan is Santosh Sidham who fired a bullet at Vijay Karme. The incident took place on Monday at 7:30 am on Aalandi road, located 3 km from Etapalli tehsil headquarters. In this regard, the process of registration of the case continued till late evening at the Ethapalli police station. But this incident caused panic in the police.

A bullet was fired in a mutual dispute

The Very Quick Pathak (QRT) operatives intended to conduct an operation against the Naxals at Marga Aaland in Ethapalli Tehsil. Meanwhile, a jawan named Santosh Sidham shot his colleague, a soldier named Vijay Karme. But due to the large distance between them, Kirme was injured in this incident. After the incident, he was airlifted to a hospital in Nagpur for treatment. It is reported that a dispute arose between them. Which is why Siddam shot Carme. Such a discussion began.

The case is under investigation: Sudarshan Rathod

Such incidents have already happened

Incidents of firing at each other due to mutual disputes between servicemen stationed in the area have occurred in the area before. A few months ago, a dispute broke out between two SRPF personnel working at the Marpalli Police Assistance Center in Ageri Tehsil. At the same time, as soon as the dispute reached its climax, one soldier shot himself by shooting another. At the same time, there is information that similar incidents have occurred before.