The secret of the leader Pueyrredón, who beat Bahía Basket in a historic game 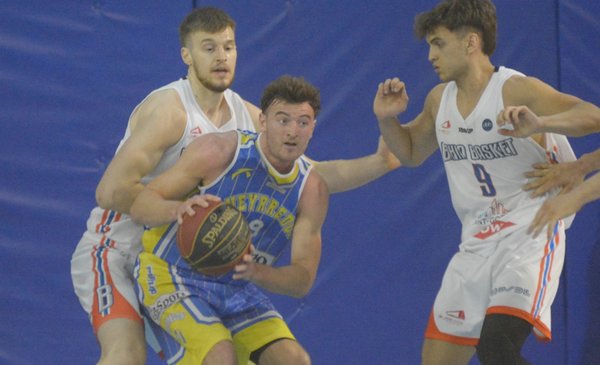 It is so true that almost the entire sixth date remains to be played as Pueyrredón is the only leader of the local first division tournament. And it is not surprising.

Last night, the absences of Bahía Basket (see separately) simplified the task, beyond the fact that he played a good game, had personality and ended up imposing by a clear 105 to 78.

“We know that we can play any team in the local tournament and also Bahía Basket. We are first and it seems to me that it is not a surprise,” Segundo Vasconcelo told The new one.

The point guard was the leader of the visit at the dawn of the game, when those led by Fabricio Piccinini achieved an advantage that throughout the game – with some potholes – he managed to maintain.

Based on rotation and cuts to the basket, Pueyrredón escaped 9 to 2 and forced Ciro Bianchi to ask for a minute. Upon his return, the homeowner showed more aggressiveness (he was 15-16), but again faltered in the last 4 minutes and Vasconcelo (16 points in the quarter) was joined by Bellegia, Hollender and Bruni to gain distance again.

“We knew that Bahia was decimated. These are things that sometimes happen to you and sometimes you don’t, so we had to take advantage of it. They were costing us the starts of the matches, so today we focused a lot on that. Luckily we started at the top, we were at the against the whole game and we managed to maintain the difference “, added the top scorer of the game: 2-2 q3, 12-17 q2 and 5-7 q1; in addition to adding 10 rebounds, 4 assists and 2 caps.

Misetich, Tolosa, Cavero (semi-hidden) and Drocezesky, after a positive action

The best moment of Bahia was averaging the 2C: there he raised a 6-9 t3, hand in hand with Misetich and Tolosa, which reached him to reach 37-49. Even the clean and jerk brought him closer to 44-55 at the start of 3C, when the Drocezesky-Prome partnership grew.

Although then he discontinued and Pueyrredón was more serene and at the same time more precise, breaking the parity process.

An own run, the silent contribution of Pineda and good minutes of the three Agustín (Fernández, Pedro and Icasto) finished confirming the visitor victory.

“We train every day to get to the place we are today; what’s more, I think we are the team that trained the most during the pandemic and it shows, it’s a bit of a secret,” the point guard discovered.

And he completed: “As much as we are many kids, we have filming and we know each other a lot. We also play the U23 tournament together, that helps and is showing. With patience and maintaining the level of play, we can fight.”

Is on a good path.

The first Peruvian in First

Many were surprised to see Nicolás Muhvic on the court last night, a perimeter who wore the “4” shirt in Bahía Basket. Especially because of the unique way that the franchise has recently communicated (or not communicated) its incorporations …

The truth is that this boy is 17 years old and Peruvian, so he would be the first of that nationality to play at least one game in the local top category.

Of course, he is part of the Bahía Basket academy and he arrived with the intention of staying for a few months. So he would stay in the city until the end of the year.

Muhvic, head-on, next to Polak

Muhvic stepped onto the floor at 2m54 from 1C, remained 12m10 and registered a rebound (plus 0-2 on the court). And it was enough to make history. Ah, he was constantly cheered on by local supporters.

Although his continuity in Italian basketball was a fact, more specifically in Nuova Pallacanestro Messina (series C Gold), the point guard formed in Bahiense del Norte decided to return to the country and will be part of the Bahía Basket team in the domestic tournament.

In principle, it is not in the plans for the owner to play the Argentine League.

More outside than inside

Apart from a large staff, this time Bahía Basket added several players to the edge of the rectangle who did not change so as not to wear out and reach the full debut in the Argentine League, which will be tomorrow, at the Dow Center, against Deportivo Viedma.

Another particular event was the coincidence in a few minutes of David Pineda and Tiziano Prome.

The 40-year-old inmate from Pueyrredón defended (and was defended) the 16-year-old from Mar del Plata recruited by Bahía, Prome even committed an unsportsmanlike foul averaging the second quarter.

Pineda attacks with a left hand against Simondi

In August, the cadet joined the national team that was runner-up at FIBA ​​Americas and achieved qualification for the U17 World Cup. In addition, he was chosen in the ideal quintet of the contest.

The changes of scenery played a trick on one of the three referees he directed last night. Sometimes Bahía Basket plays at home at the Dow Center and at other times, like yesterday, at the Polideportivo Norte.

The truth is that there were 20 minutes until the start of the game when the judge in question, who was not Sedan or Matías, appeared at the Dow!

Fortunately, the traffic played him a good pass and — about the hour — he entered the Poli. Goodness.

Important role of women in the World Cup

“We dropped everything and ran a lot, but we still lack game,” Heinrich said.

He had 2,700 dies of LSD and said they were for consumption – they condemned him