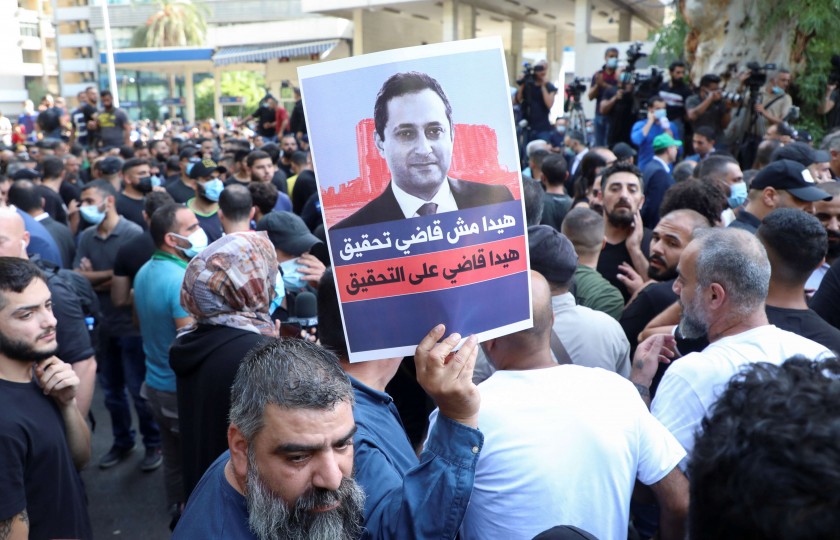 Beirut: Judge Tariq Bitar, after deciding to prosecute political and security officials in the Beirut port explosion case, crossed red lines drawn in Lebanon, only to find himself in a few months at the center of a fierce battle, and turned into a symbol for defying the ruling political class, in the eyes of many.

Today, Hezbollah, the most prominent political and military force, is leading a battle aimed at overthrowing Bitar (47 years), who is accused by several political forces of “politicizing”, while the families of more than 200 dead people put their full confidence in him to clarify the truth they have been demanding since the horrific explosion on the fourth of April. August 2020 the lives of their children.

Today, Bitar is investigating one of the largest non-nuclear explosions in the world, and the most important case in Lebanon since the assassination of former Prime Minister Rafik Hariri in February 2005.
Youssef Lahoud, one of the lawyers for the families of the victims of the explosion, who attended several interrogation sessions in the case, says that Bitar “combines between boldness and conscience, which are two essential qualities for a judge.”
Solidarity with Bitar was doubled after Hezbollah’s rhetoric against him escalated, and after local media outlets leaked last month a letter addressed to him by a high-ranking party official, which included discontent with the investigation process and threatened to remove him from his position.

Dozens of supporters of Hezbollah and the Amal Movement demonstrated in front of the Palace of Justice, calling for Bitar’s removal, but armed clashes took place during the demonstration, during which a heavy exchange of fire and shells left six people dead, in an escalation that threatens to plunge the country into a new crisis.

And if demonstrators burned his pictures in front of the Palace of Justice in Beirut and accused him of colluding with the Americans, others transmitted his pictures on social media, considering him a symbol of defiance of the ruling political class.

The problem of politicians with Bitar

Since his claim against former Prime Minister Hassan Diab and his request to prosecute deputies, former ministers and security forces, many fear that political pressures will lead to the removal of Bitar, similar to his predecessor Fadi Sawan who was removed in February after his allegations against political officials.

Bitar was forced to suspend his investigation twice, following judicial complaints from ministers wishing to question them, demanding that he stop the case. However, two courts have so far rejected the complaints. He can now resume his investigations, which he suspended on Tuesday, and set new interrogation sessions for officials who still refuse to appear before him.

“He has no known political affiliation,” says one of the judge’s acquaintances, preferring not to be named, in a country where politics interferes even in judicial appointments, and many judges are considered affiliated with sects and political parties.
“This is precisely the problem of politicians with Bitar: they have no tool to pressure him,” he adds.

‘His boldness scares them’

Bitar rarely speaks to the media, but politicians of different affiliations accuse him of making no secret of his conviction that the time has come for a change of political class.
Even his critics admit that Bitar, who hails from northern Lebanon, has maintained a good reputation over the past years. And enjoys high self-confidence, touching in the eyes of some the limits of vanity.
Bitar is rare to smile, and does not accept invitations for lunch, dinner and parties from politicians and avoids public events for fear of being accused of political ties, according to one of his acquaintances, who says, “When he was assigned to investigate, we had difficulty even finding a picture of him.”

He adds, “His boldness frightens them, as he is an unprecedented phenomenon in the Palace of Justice.”
Bitar seems determined to move forward with the investigation, counting on the full support of the families of the victims, who always demonstrate in front of the Palace of Justice to express their support for it and reject any political interference in its work.
Tariq Bitar was born in 1974 in the village of Aidmon in the northern Akkar region. He lives in the northern suburbs of Beirut with his wife, a pharmacist, and his two sons.
Since receiving the investigation file into the Beirut port explosion, he has been protected by a security and military figure.

He holds a law degree from the Lebanese University, and began his career in the north of the country before presiding over the Beirut Criminal Court.
A lawyer who knew him when he was presiding over the criminal court says that “his receipt of the Beirut port case was a loss for us in the criminal court, as we lost an honest and exceptional judge.”
Bitar handled several complex cases, most notably the case of the girl Ella Tannous, which caused an uproar in Lebanon, as he condemned in 2020 two private hospitals and two doctors and imposed huge financial compensation on the girl’s family, whose medical error led to the amputation of all four limbs.
(AFP)