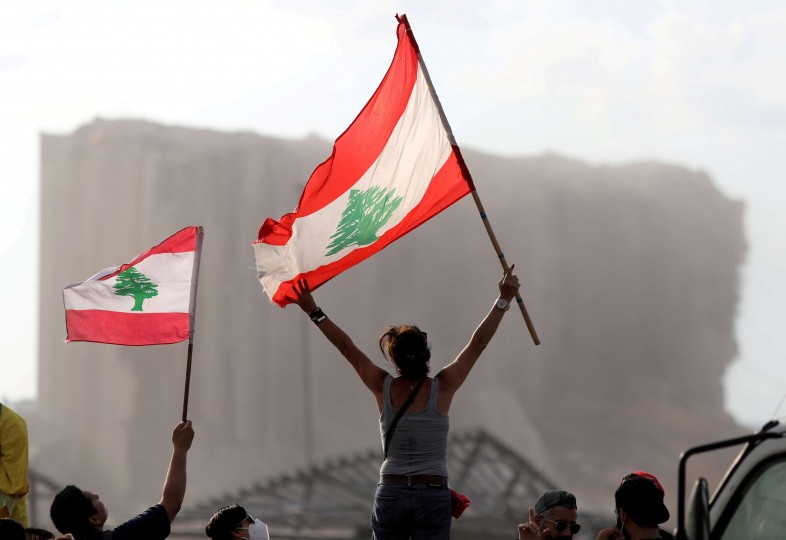 Beirut: On August 4, 2020, a huge explosion rang out in Beirut, destroying neighborhoods, killing more than two hundred people, and exacerbating an accelerating economic collapse that has exhausted the Lebanese.
The following are the most prominent developments in Lebanon since the explosion:

On Tuesday, August 4, 2020, a fire broke out in ward No. 12 in the port of Beirut, followed, minutes after 6:00 (15.00 GMT), by a massive explosion.
The explosion, which is considered one of the largest non-nuclear explosions in the world, caused massive destruction to the port and nearby neighborhoods, killing 214 people and wounding 6,500 others.
A few hours after it occurred, authorities attributed the explosion to 2,750 tons of ammonium nitrate stored randomly in Ward No. 12.
The explosion came as an unprecedented shock, and the next day Beirut residents began searching for the missing and inspecting their damaged homes and buildings, while aid workers were busy searching for potential survivors under the rubble.
Beirut Governor Marwan Abboud described the impact as “catastrophic.” A state of emergency was declared and international aid began pouring in.

On August 6, French President Emmanuel Macron visited Beirut, where he toured the port and damaged neighborhoods amid a throng of Lebanese angry at a political class accused of corruption and mismanagement.
At the conclusion of his visit, Macron called for a “change” in the system. Then he sponsored an international conference to support Lebanon, during which the international community pledged to provide emergency assistance worth about $300 million, provided that it would not pass through state institutions.

On August 8, thousands of Lebanese demonstrated against political officials who blamed them for the tragedy, which turned out to be the result of the explosion of hundreds of tons of ammonium nitrate that had been stored for years in the port without any protective measures.
The demonstrations witnessed violent confrontations between angry protesters and the security forces, which used tear gas and rubber bullets.
Several ministers announced their resignation, in turn, until Prime Minister Hassan Diab announced on August 10 the resignation of his government.

On August 31, Lebanese politicians preempted Macron’s second visit to Beirut by agreeing to assign Lebanon’s ambassador to Germany, Mustafa Adib, to form a government.
In early September, Macron returned from Beirut with a road map, according to which the political forces committed themselves to forming a government with a “specific mission” within a maximum period of two weeks.
But on September 26, Adeeb apologized for not forming the government after he ran into disagreements between the political forces.
The next day, Macron said, “He took note of the collective betrayal” of the Lebanese parties, which, according to him, bear “full responsibility” for this failure.
“I am ashamed” of what the Lebanese leaders have done, he said.

On December 10, the judicial investigator in the explosion case, Fadi Sawan, charged Ali Diab and three former ministers with charges of “negligence, negligence, and causing death” and wounding hundreds of people.
On February 18, Sawan was removed from his position, and Tariq Bitar was appointed as his successor.

On July 2, the new judicial investigator announced his intention to interrogate Diab, coinciding with his launch of the prosecution process against a number of former ministers and security and military officials.
On the ninth of the month, the Parliament’s bureau, following a meeting with the Parliamentary Administration and Justice Committee, requested Bitar to provide it with “evidence and all documents and papers that would establish suspicions” against the representatives who held ministerial positions.
Three days later, the judicial investigator refused the request.

On July 15, nine months after his assignment, Saad Hariri apologized for not forming a government after sharp political differences with the President of the Republic prevented him from completing the task. Hariri and Aoun have spent the last months exchanging accusations of obstruction due to the dispute over quotas, the nomination of ministers and the form of the government.
On July 26, Najib Mikati, who headed two governments in 2005 and 2011, commissioned the formation of a new government.
On August 4, the French president sponsored a third international conference, during which donors pledged $370 million to Lebanon.
On September 10, after 13 months of waiting, Lebanon got a government led by Mikati.

Pressure about the investigation

On September 16, Tariq Bitar issued an arrest warrant for a former Minister of Transport.
On the 27th of the same month, the judge suspended his investigation after a former minister filed a lawsuit against him accusing him of impartiality.
On September 29, hundreds of Lebanese demonstrated in Beirut to denounce political pressure over the investigation.
On October 4, the Beirut Court of Appeal dismissed the case against Judge Bitar.

On October 11, Hezbollah Secretary-General Hassan Nasrallah denounced what he described as “discretionary” of the judicial investigator, calling for a “honest and transparent” judge to complete the investigation of the case.
The day after that, Bitar issued an arrest warrant against the former Minister of Finance, Ali Hassan Khalil, before he was forced to suspend the investigation again after new lawsuits demanding that the case be transferred from his hand.
On October 14, the Civil Court of Cassation dismissed the cases and the judge resumed the investigation.

Six people were killed and at least thirty wounded as a result of shooting during a demonstration by supporters of Hezbollah and the Amal movement against the judicial investigator in the case of the Beirut port explosion.
(AFP)