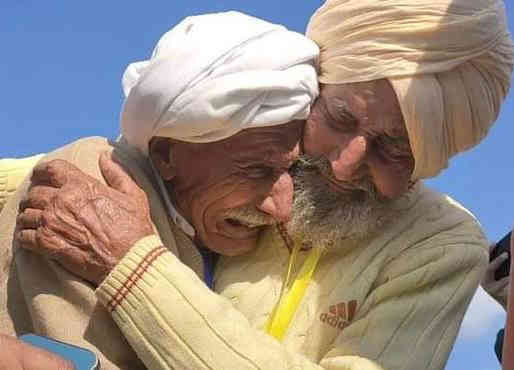 The two brothers, who were separated when India-Pakistan split, had an emotional reunion in 3 years. The family of the two brothers met decades later.
At the time of India-Pakistan partition, a very painful situation was created. How many stories are still coming up? Tears welled up in the eyes of many after seeing the same emotional story of 3 year old Siddiqui Khan and Habib Khan.
A YouTuber named Nasir Dhillon reunited the two separated brothers. This YouTuber runs a YouTube channel called Punjab Lehar and through it it unites the families of a united India. Through this channel, Nasir Dhillon has so far reunited 200 families of united India.
At the time of partition, Siddiqui Khan and Habib Khan were separated. 3-year-old Siddiqui Khan lived in the Punjab province of Pakistan, while Habib Khan alias Sikka Khan lived in the Indian Punjab. The two brothers parted ways due to the split. Their reunion was never possible after that. The two brothers were reunited through the efforts of Nasir Dhillon. People of Punjab get entry without visa through Kartarpur corridor. The two brothers, who had parted ways through the corridor, had an emotional reunion. The families of the two had climbed Hibk at this time. Tears welled up in the eyes of everyone who saw the reunion of the two brothers. Videos and photos of this emotional event went viral on social media in both countries.