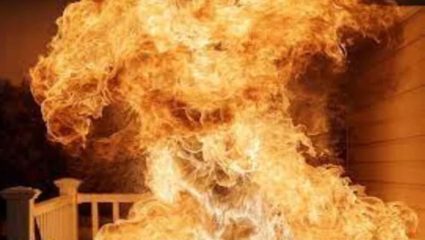 Officials gave this information on Saturday.

Gonda: In a village under Motiganj police station area of ​​Gonda district of Uttar Pradesh, a young man set himself on fire by sprinkling petrol after the girl rejected the marriage proposal. Officials gave this information on Saturday. He told that in the process of saving the youth, the girl and her parents and brother also got burnt.

According to officials, the youth died during treatment at the district hospital, while the condition of the girl and her family is said to be stable. Police Officer (Sadar) Laxmikant Gautam said that Vimal Kishore (25), a resident of Salimpur Atasa in Farrukhabad district, used to work as an electrician in Lucknow’s Transport Nagar. Mahesh of Gonda district also lived with him.

According to Gautam, Vimal and Mahesh used to visit each other’s house due to their close friendship. Meanwhile, Vimal fell in love with Mahesh’s younger sister and started talking to her, he said. According to Gautam, Vimal had reached Mahesh’s house with him on Friday and when he proposed marriage to the girl after having dinner, he refused. Infuriated by the girl’s refusal, Vimal sprinkled petrol on himself and set himself on fire, he said.

According to Gautam, the girl’s family members tried to douse the fire, in which Mahesh and his mother were seriously injured, while his father and sister were partially burnt. He said that as soon as the information was received, the police reached the spot and took everyone to the district hospital, where the doctors declared Vimal dead during treatment, while the treatment of the other four people is going on. According to Gautam, Panchnama and post-mortem are being done by the local police after reaching the spot. The relatives of the deceased have been informed about the incident. (agency)

The problems of cooperation increased in the world due to the competition of big countries to move forward, the challenge before the international system ...

For only Rs 200 per dish, a 13-year-old boy who cooks delicious Chinese food Pi News